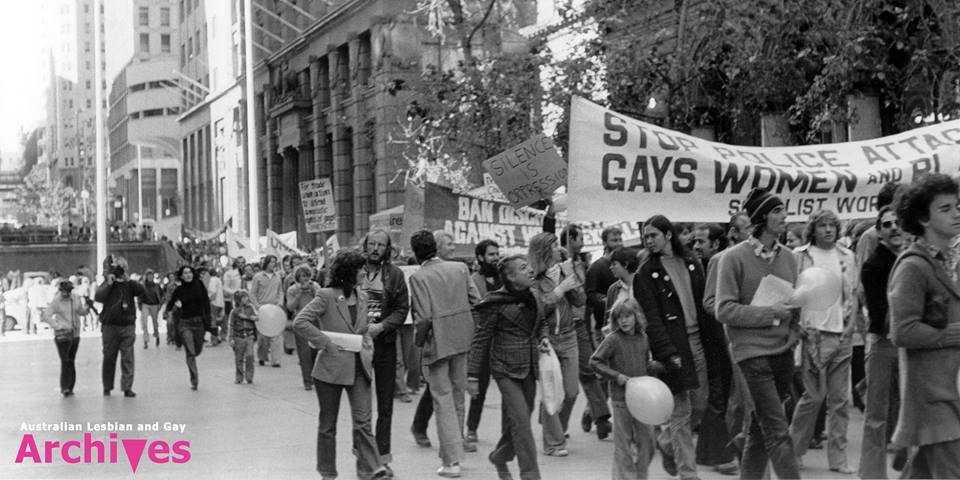 For all tomorrow’s queers: LGBTIQ histories for the future

What moments in LGBTIQ history do we hear most about? What moments tie our own stories to larger narratives of history? How do we inherit significant historical moments in our communities? And what do we want to pass on as a heritage of queer activism to those who will come after us? Join Carol D’Cruz (chair), Quinn Eades, Roz Ward, Todd Fernando, Jamie Gardiner, and Crystal McKinnon as they discuss the queer past and future with drinks and good cheer. This panel discussion is part of LGBTI History Month.

The panel discussion will start at 7pm but join us earlier for a special screening of Mat Govoni and Monique Schafter’s award-winning short, In My Shoes, on transgender youth and Qlife’s shorts on intersex and mental health.

Half the price of house red, white and a craft beer will be donated to a LBGTI charity.

Carol D’Cruz (chair) is a Senior Lecturer for Gender Sexuality and Diversity Studies at La Trobe University. She is author of Identity Politics in Deconstruction: Calculating with the Incalculable (Ashgate, 2008) and is co-editor of After Homosexual: The Legacies of Gay Liberation (UWA Press, 2013). She has also published in Overland and The Lifted Brow

Quinn Eades is a researcher, writer, and poet whose work lies at the nexus of feminist and queer theories of the body, autobiography, and philosophy. Eades is published nationally and internationally, and is the author of all the beginnings: a queer autobiography of the body, and Rallying. Eades is a Lecturer in Interdisciplinary Studies at La Trobe University, as well as the founding editor of Australia’s only interdisciplinary, peer reviewed, gender, sexuality and diversity studies journal, Writing from Below. He is currently working on a collection of fragments written from the transitioning body, titled Transpositions.

Roz Ward co-founded, developed and directed Safe Schools Coalition Victoria (SSCV) from 2010 until 2017 while working as a researcher at La Trobe University. SSCV provided the model for the federally funded national Safe Schools initiative that received international recognition for best practice from UNESCO. Resources produced under Roz’s direction include All of Us, Gender is Not Uniform, and the first Australian Guide to Supporting a Student to Affirm their Gender Identity at School. Roz is a long time left wing activist and one of the most well known Marxists in Australia. Roz is currently involved in a range of campaigns including equal marriage, refugee rights, Indigenous self determination, the campaign against racism and fascism, and rebuilding rank and file trade unionism.

Todd Fernando, a descendant of the Wiradjuri peoples, is a PhD candidate specialising in medical anthropology with the Centre for Health Equity and the Melbourne Poche Centre through the Faculty of Medicine at the University of Melbourne. His PhD focuses on the intersection between Indigenous Australian Health Systems and Homosexuality. In addition to Subject Coordinating Faculty of Arts and Master of Public Health subjects, Todd has an academic interest in indigenous queer theory, health policy, racial literacy, whiteness studies, and indigenous global politics. Todd also works in close collaboration with the University of Melbourne Chancellery to advance tertiary curriculum, research, and policy.

Jamie Gardiner began a lifetime of human rights activism in the early seventies when he went to London as a student, set up University College’s first Gaysoc, and spearheaded the establishment of the NUS Gay Rights Campaign. Soon after coming home in 1975 he established the Central Victoria Gay Group and helped establish the Homosexual Law Reform Coalition, later becoming President. Following the successful “Equality for Homosexuals. Now.” campaign, ending gay men’s outlaw status, he pursued anti-discrimination protections. A Victorian AIDS Council co-founder, Jamie helped put the Australian response on a human rights footing. Appointed an Equal Opportunity Commission Member in 2001, he contributed to Victoria’s human rights, and specifically LGBTI equality, agenda. As a Liberty Victoria Vice-President he helped campaign for Victoria’s Human Rights Charter. Through the 2000s Jamie worked with the Attorney-General’s Committee to secure legal reforms for couples, transgender and intersex rights, and campaigns against homophobia. In the ALP Jamie has helped significant LGBTI policies be adopted at State and National level.

Crystal McKinnon is a Yamatji woman who is currently finishing her PhD in the Department of Historical and European Studies at Latrobe University. Her thesis examines Indigenous sovereignty, and looks at resistance to oppression through the arts, including music and literature. She is currently a member of the steering committee for the Law and Advocacy Centre for Women. Crystal has worked across both the university and the Aboriginal community controlled organisation sectors, teaching at The University of Melbourne and La Trobe University, and working in research and projects at the Victorian Aboriginal Legal Service and Elizabeth Morgan House Aboriginal Women’s Service. She is a co-editor of History, Power and Text: Cultural Studies and Indigenous Studies (UTS ePress, 2014), and her work has been published in Making Settler Colonial Space: Perspectives on Race, Place and Identity (Palgrave, 2010), Biography, the Alternative Law Journal, and Parity.