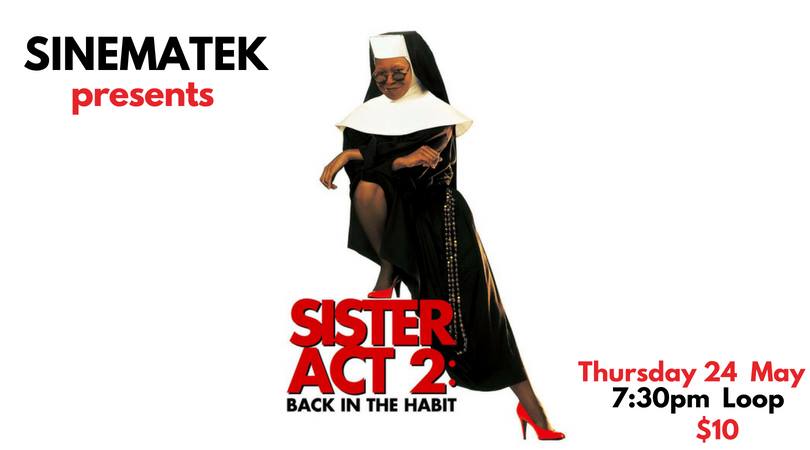 Sinematek presents – Sister Act 2: Back in the Habit

“If you wanna be somebody, if you wanna go somewhere, you better wake up and pay attention.”

Alrighty loyal sinephiles, this one is for you! Sinematek is happy to present an absolute banger of a film: SISTER ACT 2: BACK IN THE HABIT.

For anyone who grew up in the 90s and beyond, Sister Act 2 is simply a landmark film. This is the film that you had to watch every time it played on TV, despite the fact that you already owned it on VHS. Why? Because it truly lifted you up and inspired you to follow your dreams. Sister Act 2 is the quintessential feel good film but with one razor sharp edge…an incredible soundtrack!

For those of you who missed it, EGOT winner Whoopi Goldberg returns as feisty lounge singer Deloris Van Cartier in this sequel to the 1992 smash hit film Sister Act. This time around, the sisters of St. Catherine’s are in over their heads trying to run an inner city school full of rowdy teenagers. Their prayers are answered when Deloris agrees to go undercover as the school’s new music teacher. Once again, Sister Mary Clarence finds herself dodging dogmas and rockin’ religion as she tries to convert her “class from hell” into a hip-hop gospel choir from heaven.

We’re kicking off at 7:30 with trailers for upcoming Sinematek films, followed by the feature shortly after. Tickets once again are $10. Book online to avoid disappoint.

Loop is an inclusive and accessible venue priding itself on being a safe space to all. Sinematek welcomes everyone to the party, and don’t be afraid to come alone as you will definitely meet some warm and welcoming patrons at these screenings.

See you at the sinema x