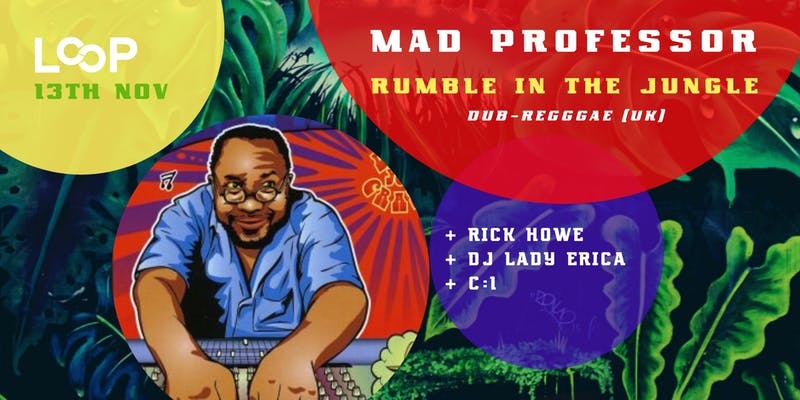 Loop Grooves Presents Rumble In The Jungle with the MAD PROFESSOR (Live) at 10:00 pm on Wednesday the 13th of November.

HEADLINE
Dub UK legend MAD PROFESSOR has made over 80 records under his own name across four decades, along with countless remixes for artists such as Sade, Salmonella Dub, Grace Jones, The Orb, Jamiroquai, Beats International, Massive Attack, Robyn and Depeche Mode.

SUPPORTED BY
PBS FM’s Rick Howe and Melbourne’s warrior queens of bass, playing back to back for the first time – C:1 and Lady Erica.

MAD PROFESSOR
A disciple of Lee “Scratch” Perry, Mad Professor was one of the leading producers in dub reggae’s second generation. His Dub Me Crazy albums helped dub make the transition into the digital age when electronic productions started to take over mainstream reggae in the ’80s. His space-age tracks not only made use of new digital technology but often expanded dub’s sonic blueprint, adding more elements and layers of sound than his forebears typically did. In the mid-’90s, he returned to the basics, debuting a more retro-sounding style on the Black Liberation Dub series. Additionally, he ran his own studio and label, Ariwa, which was home to a stable of vocalists (with an emphasis on lovers rock and conscious roots reggae) and some of the finest British reggae productions of the era. As his reputation grew, he became a remixer of choice for adventurous rock and techno acts.

Mad Professor is in demand as a remixer for rock, R&B, and electronica acts. Over the course of the ’90s and into the new millennium, he would remix tracks by Sade, the Orb, the KLF, the Beastie Boys, Jamiroquai, Rancid, Depeche Mode, and Perry Farrell, among others. His best-known project, however — and the one that truly established his credentials — was 1995’s No Protection, a completely reimagined version of trip-hop collective Massive Attack’s second album, Protection. Perhaps creatively refreshed, Mad Professor’s own albums started to regain their consistency in the mid-’90s.

VENUE
Don’t miss this intimate show at LOOP on it’s custom-built Void Surround Sound system and large-format screens to hear experience the full effect of this UK legend live in the mix! Let the bass drop and feel the rumble in the jungle!

TICKETS
Tickets are strictly limited to just 120, so get yours now before they sell out!
Tickets $20 online / Increases on the door.