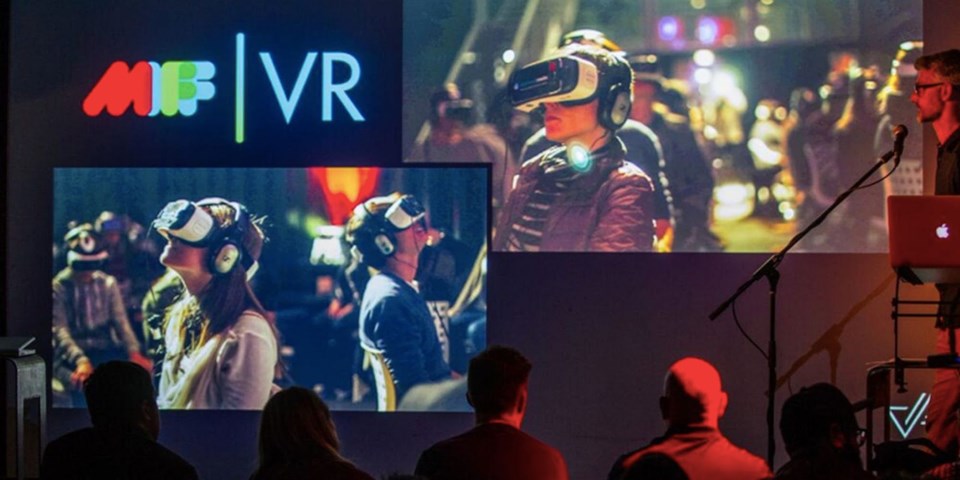 Virtual Reality returns to MIFF in 2019 to continue rewriting the frontiers of storytelling! Featuring a program of local and international narrative, documentary and animated experiential works, it’s time again to strap on a headset and prepare to experience the jaw-dropping potential of total immersive cinema.

Real World VR will host a series of panel talks with some of the most talented virtual reality filmmakers in Australia, featured at The Melbourne International Film Festival. The night includes talks and Q&A with the filmmakers, networking and nibbles, Kaiju Beer specials, virtual reality film trailers from MIFF VR and curated VR works.

ISOBEL KNOWLES & VAN SOWERINE – MIFF VR FILM, PASSENGER
Isobel Knowles and Van Sowerwine have collaborated together since 2001 on animated works within film, installation and interactivity. Their work investigates narratives of community, childhood and metamorphosis and engages viewers both physically and emotionally. Their award-winning installations have been exhibited nationally and internationally including the ICA, London, at Ars Electronica, Linz, at the Seoul New Media Biennale, at the Art Gallery of NSW and as part of the Melbourne International Arts Festival’s visual arts program. Their films have screened at film festivals across the world including at Cannes and at the Sundance Film Festival.

Passenger Synopsis – Through the universally familiar experience of a taxi ride, we explore a surreal shape-shifting landscape made from cardboard where you, as the passenger, have arrived to live. Your driver, a recent immigrant himself is your guide as you progress into the quiet shock of a new world.

MOLLY REYNOLDS – MIFF VR FILM, THE WAITING ROOM
Molly Reynolds is a director and producer, known for Another Country (2015), The Balanda and the Bark Canoes (2006) and Prism (2007).

The Waiting Room ruminates on humanity, on its creativity and its destructiveness. Presented on the Dreamdeck360 platform, it invites participants to consider a deep, meditative engagement with the questions at the heart of the work. They are questions not unfamiliar to Reynolds and de Heer, who have frequently addressed issues of colonisation and cultural survival, as in their films Another Country (MIFF 2015) and Still Our Country – Reflections on a Culture (MIFF 2014). They have created The Waiting Room with collaborator Mark Eland.

Drawing inspiration from Dreamtime stories and practices, four young Aboriginal Australians take you on an immersive journey through their visionary futures.

Sutu (aka Stuart Campbell) uses art and technology in new ways to tell stories. He has been commissioned by the likes of Marvel, Google and Disney to create VR art for properties such as Doctor Strange and Ready Player One. He has also created four VR documentaries; Inside Manus for SBS, Mind at War for Ryot Films and The Battle of Hamel for the Australian War Memorial and Future Dreaming for NITV. He is also known for his interactive comics including the Eisner-nominated These Memories Won’t Last. The Webby award-winning Nawlz, The Gold Ledger-winning Neomad, and Modern Polaxis. He holds a Honorary Doctorate of Digital Media from Central Queensland University, is a 2017 Sundance Fellow and is the co-founder of EyeJack an Augmented Reality company.

SARAH-JANE WOULAHAN is a Melbourne-based writer and director whose work spans fiction, documentary, art and VR. Her shorts have screened at festivals internationally including SxSW and her HotShots funded sci-fi short A TERRIBLE BEAUTY premiered at MIFF 2016. Its feature incarnation LOVE IS A DREAM is in development with funding from Screen Australia. She is a current PhD candidate doing by-practice comparative film language study between live-action, narrative VR and traditional film. She’s a represented commercial director through Melbourne production company Monster & Bear.

Kate Fitzpatrick is the MIFF Schools + VR Programmer at the Melbourne International Film Festival. She has worked in the Arts for over ten years for organisations such as the Australian Centre for the Moving Image. She has served on the jury for Melbourne Fringe and presented at SXSW Film Festival.