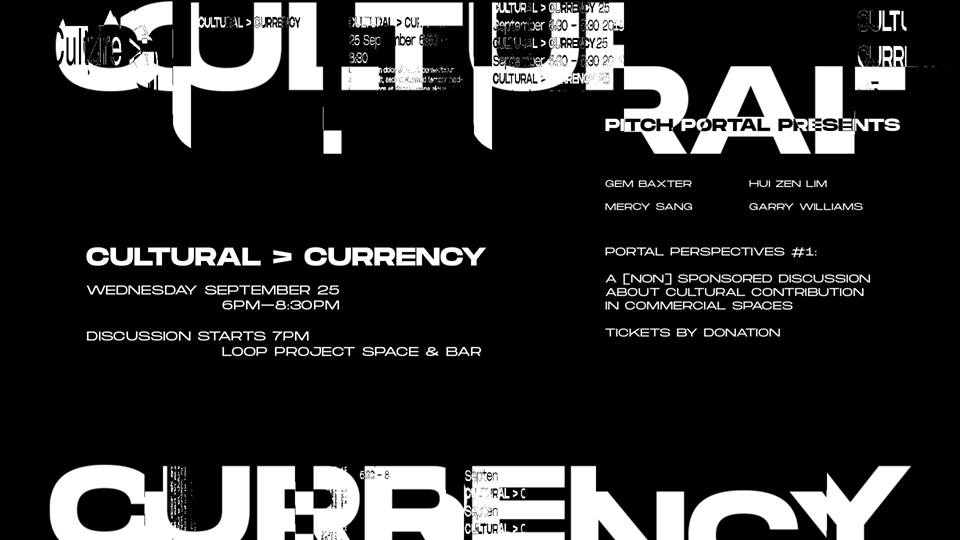 Cultural > Currency is a [non] sponsored conversation about producing subculture-driven practices in commercial spaces. Pitch Portal will talk to four Melbourne-based artists / cultural practitioners about contributing to their IRL and digital communities while navigating a digitally driven and increasingly branded world.

With perspectives from:
Gem Baxter — Founder + Designer of To Barwyn and back
Hui Zen Lim — DJ + Founder of Arouze
Mercy Sang — Model + Founder of Poccmag
Garry Williams — Founder at ALTS Projects & Creative Producer, Innovation at The University of Melbourne

Gem Baxter — Founder / Designer of To Barwyn And Back
Born in Nth Qld, Gemma came into clothing design via architecture, to explore big ideas about sustainability, through a more accessible medium. She set out to create clothing special enough to encourage positive behavioural change, namely for more people in cities to ride as a means to commute, however has adapted the vision for the brand to prioritise being a voice for transparency and innovation in the clothing industry, and to continue to create and share ideas that inspire and educate.

Hui Zen Lim — Founder of Arouze and DJ
Hailing from Malaysia, Hui Zen aka Zeneth Altrow has added ‘DJ’ to their long list of ‘slashes’ earlier in the year. The former radio announcer, artist manager, publicist and on-going event curator has always had a passion for connecting with a crowd, and the move over to DJing has allowed them to do just that in an extremely tangible way. Their work is centered around the concept of bridging the gap between cultures and communities through both music and artistic representation. Existing within a digitally driven world, they’re intrigued by the different forms of connections that individuals are able to form through each person’s interactions with content and the tangible world.

Mercy Sang — Model & Founder of Poccmag
Mercy started her career as a model and after observing the media’s underrepresentation of the creatives she admires she established Poccmag to both champion and celebrate the people she believes in. An online magazine and soon to be on print focuses on uplifting and creating a platform for creatives spanning in fashion, art, film and photography, with both established and emerging creative’s both locally and globally. A celebration of both heritage and community.

Garry Williams — Founder at ALTS Projects & Creative Producer, Innovation @ University of Melbourne
Garry runs ALTS – a whatever/ hybrid of content and activation focussed on ‘unconventional career paths and the projects that consume us.’ Projects that fall under the ALTS family include events such as Melbourne Tech programming, FuckUp Nights Melbourne and Sydney, and soon: AGENT (Melbourne) and Snap Crackle Pop Culture. He also works as the Creative Producer of Innovation at Science Gallery Melbourne/ University of Melbourne, and is an advocate for multiple side projects and of course, mischief.

Pitch Portal acknowledges Aboriginal and Torres Strait Islander people as the first sovereign owners of this unceded country and we pay our respects to their Elders, past, present and emerging.