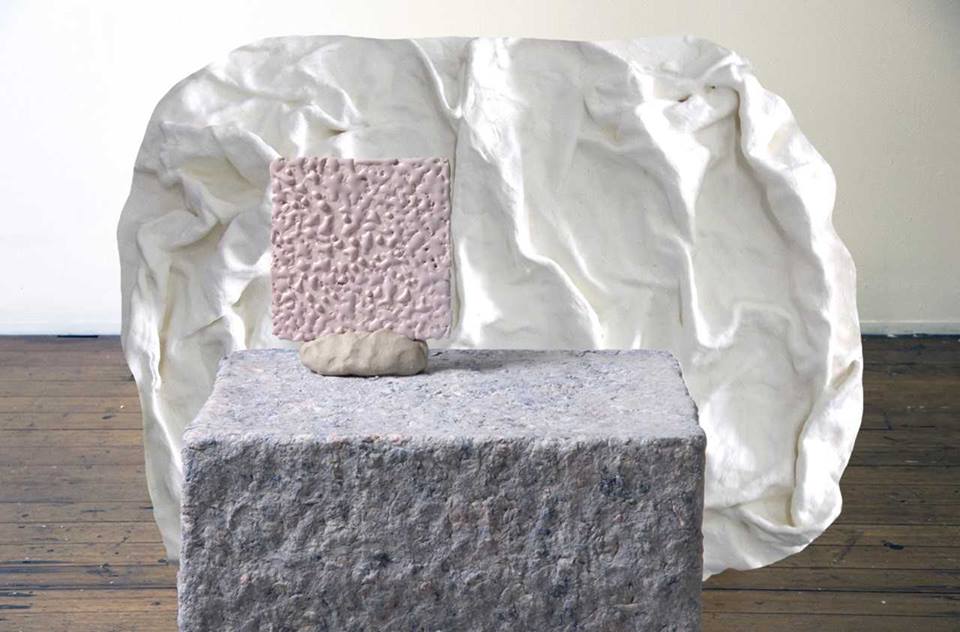 Madeleine Thornton-Smith is interested in challenging archetypal forms of the medium and Greenbergian notions of “medium-specificity” through remediation and material investigation. Remediation is the act of re-forming an object in a material it wouldn’t usually be made from, relating to the idea of mimicry in that replicas of objects are made using alternate materials. Casting objects creates an “index” that emulates the original, reflecting Baudrillard’s ideas on simulacra, yet this replica exists within its own separate reality, challenging material hierarchies of its original form. Thornton-Smith wishes to interrogate conventional methods of display. Plinths, shelves and frames are so often treated like invisible “gallery furniture”; objects which traditionally obfuscate themselves, to disappear, beneath that which is more “important”: the “art”. In order to question these conventions, the artist has reconfigured these forms through subverting their material – making plinths, shelves, vessels and frames out of clay, concrete, papier-mâché and Styrofoam, casting paintings and textures with plaster and slip, frames out of acrylic paint, and so on. The objects’ installation challenges traditional relationships between object and medium, artwork and its presentation. Scale is also important. It is common in a gallery to encounter sculpture and painting of a size and position that engages with the body. It could be argued that gallery aids such as plinths and shelves are redundant in such a small-scale set of spaces like LoopHole, which already sit at a comfortable viewable height. What then could these pieces of gallery “furniture” in the small cabinets signify? Could they be referents to methods of display in the gallery, to mediums such as painting and sculpture, or to art itself? The spaces themselves then become part of the artwork, and question what a contemporary art gallery is and what it could be. These somewhat banal structures in the gallery have led to new ideas surrounding growth. The plinth, for instance, no longer acts as a subservient object, existing only to support the artwork but instead becomes the artwork. Philosophers Gilles Deleuze and Félix Guattari write about the arborescent power structures that control hierarchies of knowledge and power. The rhizome, much like a mass of roots that grows underground like bamboo, spreads sideways, and follows no strict hierarchy. The traditional hierarchical structure of art history dictates that artwork (or idea) is greater than support (plinth, frame, shelf, material). These power structures also apply to hierarchies of the medium itself and so called “craft” practices like ceramics: painting is “greater” than pottery, sculpture greater than furniture, and so on. Stepping sideways is not to say that now, plinth is greater than artwork. Plinth is artwork. Painting is not greater than ceramics. The painting is ceramic. Some of the pieces the artist has made now grow into something else – exploding from their original cardboard or wooden structures into new forms that no longer resemble their starting point. Madeleine Thornton-Smith has a background in painting and training in ceramics. Moving from a primarily image-based practice to an object-based practice, she is interested in the tension between these two forms of artmaking. She has obtained various qualifications including a Bachelor of Arts/Visual Arts (Monash, 2013), Honours of Fine Art (Monash, 2014) and Diploma of Ceramics (Holmesglen, 2017). In 2017 she achieved First-Class Honours in Object-Based Practice (Ceramics) at RMIT. Recently she has been challenging traditional archetypes of the vessel, pedestal and canvas by subverting the idea of the “support” or “medium” in contemporary art. Exploring Marshall McLuhan’s claim that “the ‘content’ of any medium is always another medium” (in Lange-Berndt, 2015, p. 200), she asks whether the “content” of an object changes if its medium challenges an expected archetype. Madeleine has exhibited in various galleries throughout Melbourne, including Blindside, Seventh, Lamington Drive and Craft Victoria.