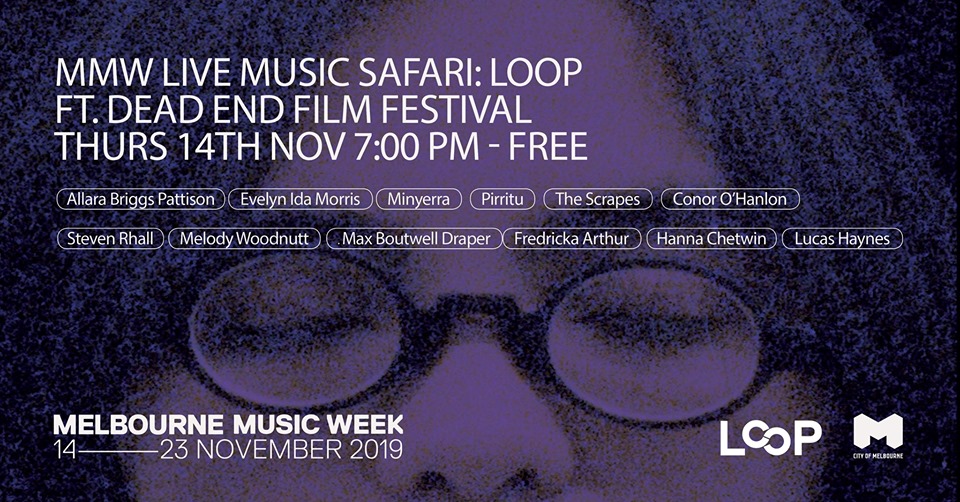 This event is a live celebration of six emerging solo performers paired with six filmmakers.

Equipped with a loop station, double bass, electric bass and bright spirit, Yorta Yorta woman Allara Briggs Pattison has an enchanting glow when she performs, always gracing the stage with a passionate grin from ear to ear.

Evelyn Ida Morris is non-binary and uses they/them pronouns. Evelyn is an Aria-nominated musician and composer. Celebrated for their dexterity across multiple instruments and for songwriting that is complex and structurally adventurous, alongside a diverse improvisational musical performance practice.

They have released five albums as Pikelet, and in 2018, released their first album as Evelyn Ida Morris – a collection of ambitious piano compositions about gender queerness. They recently made their first feature-length soundtrack, for the film ‘Acute Misfortune’, which was nominated for an ARIA Award.

Minyerra is an ever present buzz that emanates forth from the sacred biyala (redgum) and wala (waters) of Kaieltheban land. Minyerra is sonic lore manifest. It is a meeting of country and analog synth textures. Minyerra is a project of Wurundjeri land based Yorta Yorta artist Neil Morris (DRMNGNOW).

A Ngiyaampaa man from the Wangaybon Nation in Western New South Wales, Brett began his musical journey at the age of 20. He quickly started crafting his own songs and now finds himself residing in the music metropolis of Melbourne, making tunes for the malleable hearted.

With his layback and structured approach to music, Brett’s story telling matched with the natural and earthy tone of his voice makes you feel like a Rainbow Lorikeet in a Wattle Tree. His sound comes from listening to folk and acoustic surf music with hints of country hidden between the lines. His writing is honest and personal and set against a sound scape that goes from sunny and toe tapping to a rainy sadness felt by a lonely lover on a Sunday. His music often celebrates the love he has for his family and the people.

Ultimately intuitive, but born of a deep knowledge of tradition and a subversive philosophical leaning, The Scrapes are without a doubt a one-of-a-kind entity on the global music stage.

Formed in Brisbane Australia in 2009, The Scrapes is a duo of orchestral, dense rockabilly guitar (Ryan Potter) and scraping, emotive electric violin (Adam Cadell). Together they make howling mechanical dirges with fiddle, guitar and other F/X, with plenty of nods to Henry Flynt, Tony Conrad and The Dirty Three.

Conor O’Hanlon improvises musical landscapes using voice, stringed instruments and tape machines. His work responds to built or natural environments and often invokes his Irish ancestry as well as diverse other devotional and folk traditions he has encountered in his travels through the Caucasus, South Asia and East Asia.

Woodnutt is a descendant of the pirate, Blackjack Woodnutt and the granddaughter of a boat builder and naval architect. Woodnutt’s arts practice continues this lineage by building ephemeral structures that relate to Foucault’s heterotopian ship: offering immersive portals to other worlds by sculpting darkness or building experiential frames.

Biennially she is the Artistic Director of an international film platform, The Weight of Mountains.

She is an artist working within performance installation, sound, and 16mm film. In 2019 she will work to combine all mediums into a singular work.

Fredricka Arthur undertook the Advanced Diploma of Professional Screenwriting at RMIT in 2017. Her work has a strong focus on diverse and inclusive practice, values which have been shaped through her involvement with St. Martins Youth Arts Centre and Phunktional Arts Limited. She is currently working on various music, film and prose projects including a queer, disability-driven superhero script with fellow writer, Jess Kapuscinski-Evans.

Her short films and expanded film works have been included in festivals such as the Melbourne International Film Festival (2015, 2016, 2019), the Milwaukee Underground Film Festival (2015, 2016, 2019), the Kuala Lumpur Experimental Film and Music Festival (2015) and the Florida Experimental Film Festival (2015). Her expanded audiovisual work has been performed at Liquid Architecture (2016), the Inland Concert Series (2016, 2017, 2018) the Astra Concert Series (2018) and Arts House (2019). Her collaborative work with film lab Artist Film Workshop has been exhibited at CCP gallery (2017), screened at the MCA in Sydney, AIEFF and Slopes Gallery, Melbourne (2014). She is an active member of Artist Film Workshop.

LOOP Is a safe and inclusive space with disability access.