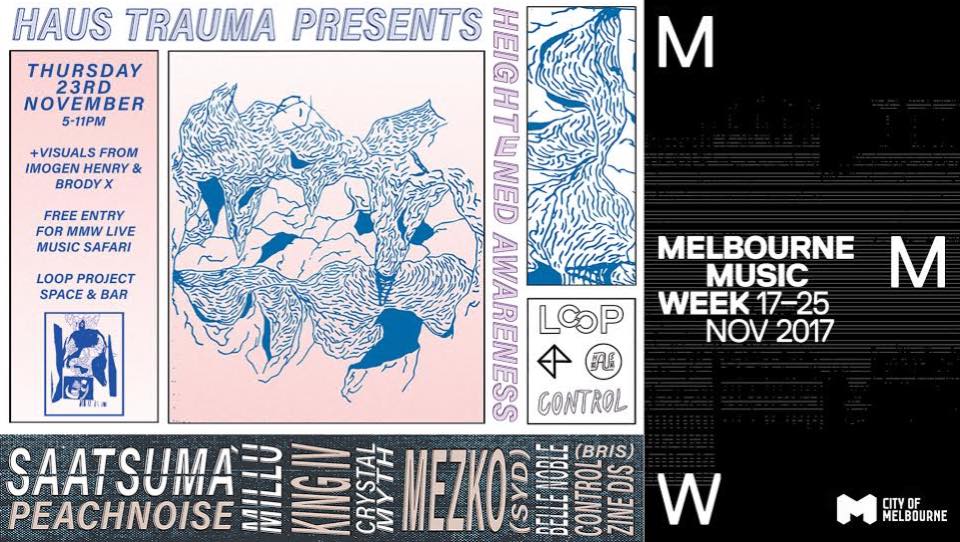 **We aim to make this event to be a safe and comfortable space for everyone. There will be gender neutral bathrooms located next to the band room. If there are issues during the event please don’t hesitate to alert me (Sebastian) who will be around on the evening. As this show takes place on stolen land we would like to pay our respects to its elders past and present and to recognise that sovereignty was never ceded.**

Lineup:
SAATSUMA
The enthralling, Melbourne based duo SAATSUMA unveil an eclectic masterpiece with the release of their starry debut album, Overflow, out now. The stellar release follows the success of their lunar inspired single, ‘Crescent’ which was premiered by Red Bull Music and received support from the likes of triple j, PBS and 3RRR.

An enigmatic electronic duo composed of Memphis LK and Cesar Rodrigues, SAATSUMA’s most recent offering encapsulates the pair’s glowing production finesse and lyrical dexterity. Combining their trademark smouldering vocals, infectious beats, warped synth and throbbing bass, with an entrancing reference to the overarching theme of water, their debut album, ‘Overflow’ represents the beginning of a glowing future for SAATSUMA.

Making their mark at BIGSOUND 2016, SAATSUMA have since played on lineups for Paradise, The Hills Are Alive, and St Kilda Festival, as well as sharing the stage with the likes of Dorsal Fins, Thelma Plum, Olympia, Vera Blue, Yeo and PNAU.

MEZKO
Sydney duo MEZKO have just released their latest single ‘Trust’ which carries on the rock-
meets-electronica vibe heard since their debut ‘Steady On’ from 2015. They’ve been
refining their sound, philosophy and aesthetic to earn their unique place in Sydney’s music
community

A regular fixture of Sydney radio stations with three well-received singles, MEZKO have
grown a diverse, energetic fanbase through memorable live shows alongside the likes of
King Gizzard & the Lizard Wizard, Slum Sociable, The Laurels, Gold Class and The
Murlocs, and have stolen the show at events such as Volumes, Purple Sneakers x Vivid
and Perth’s Disconnect Festival.

MILLÚ
Just as likely to be soundtracking your yum cha as she is to be moving a dance floor, Millú’s deep cache of obscure jams, esoteric rhythms and club cuts fore-go conventional genre standards. With a distinct ability to re-contextualise our perception of where records should be played, her selections have provided her with regular shows on Triple R, as well as appearances at Golden Plains Music Festival, Melbourne’s Wax’o Paradiso, Club D’erange, Lost Weekend and Daydreams.

Frequent stints abroad see her record bag constantly evolving as she seeks out and brings home her unique interpretation of the world’s music.

KING IV
King IV (pronounced King Ivy) epitomises dark electronica, she writes music with a progressive fusion of modern sounds, merging influences from underground EDM and Alt-RnB scenes. Drawing inspiration from Melbourne’s rich electronic scene, she harnesses an attacking and submerging sound of deep bottom-ends and heavy-hitting beats. King IV’s first single ‘No. One’ was well received, gaining airplay on triple j after being premiered with devout blog Purple Sneakers. Her second single, ‘Like I’m Back’ set a new tone for King IV’s usual bold demeanour, showing a more intricate yet dominant approach to her sound, also securing industry attention from favourable blogs such as Pilerats and The Ladies Network.

King IV has now re-emerged to reveal a new extremity to her sound, teaming-up with Rromarin (Kult Kyss), ‘We Can Get It’ is a force entirely of it’s own. Fitted with punching vocals, vicious samples and entrancing melodies, King IV unleashes a depth and energy to her work that is sure to please the dance-floor. King IV also debuted live at the 2017 Melbourne Listen Out festival.

PEACHNOISE
Eccentric two-piece made up of Fagan Wilcox (ex-Kimbra) and Gina Somfleth (The Lovelies), Peachnoise was founded in the deep, dark, smarmy depths of Melbourne, in an unforgiving riptide of guitar pedals and musical whatsits. Recent single ‘Crush’ was played on triple j’s Home and Hosed.

Crystal Myth are fast becoming a favourite in the Melbourne underground music scene. Identical Records are ecstatic to be releasing their debut EP later in 2017.

BELLE NOBLE
‘Instinct’ is emerging artist Belle Noble’s spellbinding debut single recorded with Jack Prest (Flume, Sampa The Great, The Preatures) at the renowned Studios 301 in Sydney. The music video is a collaboration with award-winning fashion filmmakers CKOL (Country Road, L’Oreal, Sportsgirl), and promises to bring the next stunning visual chapter to the Belle Noble story. Video was added to rotation on ABC’s Rage.

Visuals:
IMOGEN HENRY
Imogen Henry is a visual artist and VJ whose work exists in the imagination of a morbid child-oracle, with a predilection for electronic music. With video and animation as her dominant medium she creates surreal environments fuelled by the thrill of technological threats, nightmarish nostalgia and visions of a joyously dystopian future.
An award-winning graduate from VCA, she has had work shown in The National Portrait Gallery of Australia, White Night, The Chin Chin Wall of Art, the Margaret Lawrence Gallery, The Gertrude Street Projection Festival, Kong and Little Creatures.

Imogen has also projected visuals as part of live music events at Loop Project Space & Bar, Boney, The Evelyn Hotel and Sun Moth Canteen. She has worked on projects for the BBC (Eurovision), Henry Saiz, The Melbourne Fringe Festival and Nike. https://www.instagram.com/imo_hen/

BRODY X
Brody started painting on the streets when he was 17 and from there grew a stirring passion to create and explore the realm of painting outside. With the walls of Melbourne city as his canvas he works predominately in the medium of painting and more recently with the moving image, projecting video and experimenting with digital soundscapes.

Incorporating stop-motion animation and live action footage, his recent video work depicts movement through space and time, playing with light and transitions shifting between the quiet and the turbulent.

In the last year his projections have been displayed The Food Court ARI, The Space Agency HQ, The Gertrude Street Projection Festival, Village festival and Loop Project Space & Bar.

Brody completed a Bachelor of Fine Arts at the Victorian College of the Arts in 2014, having three major group shows and his first solo show at The Food Court ARI in 2015. His second solo exhibition was at the Space Agency HQ in 2016, where he produced several site-specific installations.