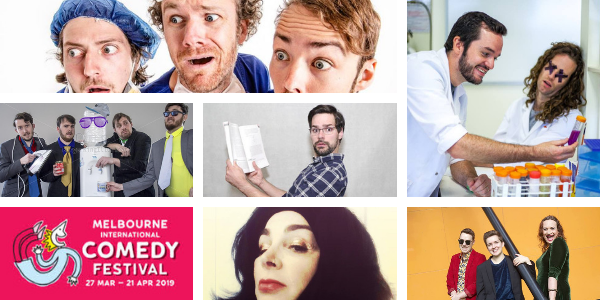 Returning after sell-out runs at the 2018 Melbourne International Comedy Festival and 2018 National Science Week, Why You’re Not Dead Yet is a comedy/infotainment/storytelling mash performed by David Farmer, a Scottish (but also Australian) neuroscientist and Jackson Voorhaar, a nine-time Melbourne International Comedy Festival and two-time Edinburgh Fringe comedy veteran..

The show consists of Dave giving a comedic informational talk, aimed at the layperson, on the subconscious functions of the brain stem – Dave’s particular area of expertise. This is the area of the brain that regulates things like your heart rate, your blood pressure and your breathing. Scientists that study fancy things like consciousness would call this ‘housekeeping’ but David calls it ‘why you are not dead just now’. All the while, this information is filtered through Jackson’s, non-scientific comedy mind to help disseminate the information to the layidiot.

…thanks for not laughing at ‘disseminate’.

‘Voorhaar is self-deprecating with spot-on comedic timing.’ The Pun

‘Jackson may not be able to play guitar but he certainly rocks.’ Herald Sun

wo comedians. Back-to-back stand up. A fully-loaded evening of laughs. One mission. To find out if they are cool… I mean probably not. Scratch that. Definitely not. But hey, it’ll be a good show.

Isaac Jones is a comedian and comedy actor. Starting out with theatre productions in high school he went to a Comedy Festival play in which he played a superhero cat’s sidekick dog. Pursuing his comedy dream, Isaac has been honing his craft for physical comedy for three years. Doing all kinds of gigs from 100+ seater rooms to improv stand-up, Isaac is invested in a life of performing theatrical and physical comedy.

Randy Adeva is a stand-up, screenwriter, stage and short film actor, improvisor, sketch-writer, comedic songwriter and show producer. An alumnus of The Improv Conspiracy, he still regularly performs improv and sketch there. He is also part of the house sketch team, Dink, that writes and performs monthly and produces Off The Cuff every month, an improvised stand-up show. Last year as part of The Victorian Avant-garde Artists’ Society, an improv group that created three-act performances based on an audience suggestion of a title for the performance, he had his first run at Melbourne International Comedy Festival and enjoyed the experience thoroughly. He is always seeking new challenges, looking to get into podcasting, voice acting and animation in the future.

‘I believe the children are our future’, sang Whitney Houston, but she never had to explain adverbial clauses to a room full of bored 11 year olds. Max Attwood has spent the last five years educating children, and as such has a pretty good grasp of what our future is like. Mostly, no one will understand adverbial clauses. In his fourth Melbourne International Comedy Festival show, Max explores the enduring appeal of four-square, details what happens when you give a sixth-grader a free-pass to call you any name you can think of and shares other valuable lessons learned from staying in school way too long.

Hot from the success of Melbourne Fringe, RHYMEZONE are set to dazzle audiences again with Rap Rap Rappin’ on Heaven’s Door – an improvised rap musical.

Cristina ‘Rhyme’ Spizzica (The Improv Conspiracy) and Jeremy ‘Zone’ Hughes (The Big HOO-HAA!) craft a completely improvised performance from a one word suggestion – and whenever the beat drops, they have to rap!

‘This show is a showcase of both skill and training, and Spizzica and Hughes radiate both to an impressive degree.’ The Plus Ones

‘An hilarious, unscripted production where one hour simply flies by with unstoppable laughter.’  WeekendNotes

Alistair Baldwin is a comedian and improviser who has written for ABC TV’s Get Krack!n and The Weekly with Charlie Pickering. Bringing dark, deadpan absurdity to his stand-up, Alistair’s material touches on themes of having muscular dystrophy, graphic design, evolution, crime, Nigella, being gay and more.

Ace trans comedienne Nikki Viveca has been described as an ‘improvisation High Priestess and general comedy goddess’ (Theatre People). Whether she is spinning tales of magic (Completely Improvised Potter), sharing personal stories from unseen pockets of the LGBTQIA+ community (Asexual Healing) or revelling in her love of sloths (The Lazy Show), she presents comedy with a touch of glamour and a ton of goofiness.

Hannah Arbuthnott first began exploring comedy at the ripe old age of 15 and is now a regular on the Melbourne comedy circuit. With unique perspective and eccentric storytelling, this fast-rising star is a relatable, honest voice among queer performers. A three-time Class Clowns State Finalist and one-time RAW Comedy State Finalist, Hannah likes to tell people that enough state finals are basically equivalent to one national final. Which is true, because – maths.

Three Dollar Bill promises to bring relatability and absurdity in equal scoops for audiences, no matter how they identify.

Vanessa Steinberg Not Quite White

A one-hour journey into the observations and experiences of a middle aged Jewish succubus who is firmly on some currently undiscovered, psychiatric spectrum. From dating advice to dermal fillers to anti-semites, you are guaranteed to be either traumatised or transfixed… maybe both.