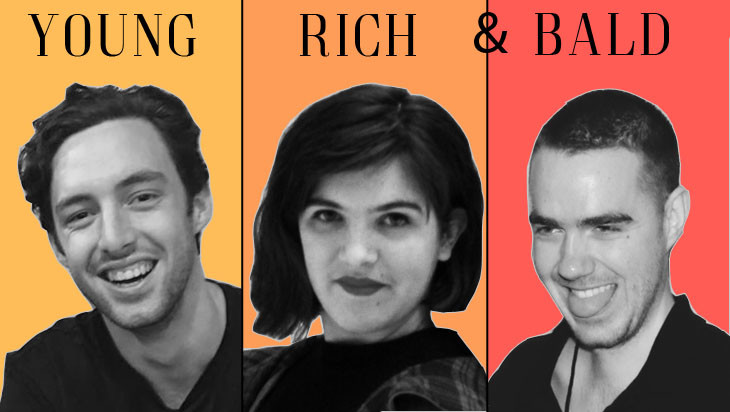 Matt Young’s (I Quit, The Leak) frantic and affable comedy blurs the line between conversation and lecture as he blends the rational with the spiritual, the optimistic with the cynical and the nature of seafood with the concept of pickling.

Kit Richards (Sexless In The City, Live On Bowen, 3 Little Gigs) uses her love of pop culture, music, feminism and Australiana in her comedy, setting her apart as one of Melbourne’s freshest new talents.

Alistair Baldwin (SBS, Vice) is one of Australia’s most exciting new disabled (polio, I think?) comedic voices. He uses his dark sense of humour and razor-sharp wit to expertly navigate taboo and divisive topics, which saw him as one of Victoria’s RAW Comedy State Finalists 2017.

Matt just wants to make people laugh and smile. He does that with comedy, writing, videos about self-care, and by saying yes to way more things than he can reasonably achieve. A stand-up, improviser and actor, Matt has been named RAW Comedy State Runner-Up, Tasmania (2014) and RAW Comedy State Finalist, Victoria (2016). He’s supported the likes of Aunty Donna, Nick Cody and Rhys Nicholson, and debuted his first show I Quit at this year’s Melbourne International Comedy Festival to sellout crowds at 1000 £ Bend . Committed to mental health and wellness, his most recent project is the YouTube series Nothing Bad Ever Happens.

Kit Richards is Melbourne based comedian who has a retroverted uterus and a big heart. She was Head Writer on Channel 31’s Live on Bowen and co-host on the popular radio show Sexless in the City. A regular performer at The Improv Conspiracy, she’s a member of the record breaking competitive improv team The Level 7’s, who have since been given a monthly show at TIC after their unmatched winning streak. She also produces and hosts the monthly Peanut Noir at Bar 303, and gigs regularly across Melbourne, bringing her trademark comic style of feminism, pop culture obsession, music and theatre to the stand-up scene.

Alistair Baldwin is a comedian and writer based in Melbourne but loyal only to Perth. He was named a 2016 Victorian State Finalist for Raw Comedy, and gigs regularly as both a stand-up and improviser in the Melbourne scene. Alistair hosts and co-produces the monthly Lemon Comedy, a night dedicated to championing diverse voices in comedy at Hares & Hyenas. He has written satire and comedic opinion pieces for SBS and VICE, and uses comedy to provide an exciting new lens on disability, politics and culture.Links to social media, videos, soundcloud etc