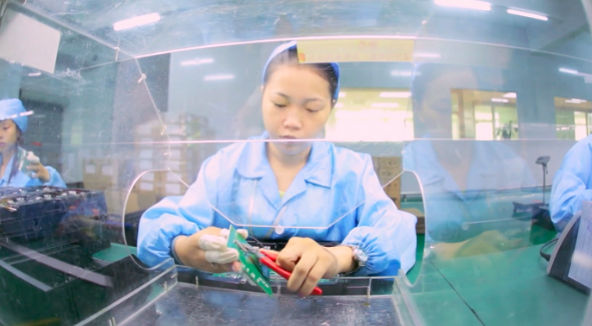 This film is an undercover investigation into the lives and conditions of workers that assemble iPhones, tablets, and other electronics in factories such as Foxconn in Shenzhen and Guangzhou, China. The film reveals the global economy’s factory floors, showing the conditions under which China’s youth have migrated by the millions in search of the espoused “better life” working for big corporations. But the reality is working long hours with toxic chemicals that cause many cumulative detrimental health conditions, including cancers. As such, a focal point of the story is Yi Yeting, who takes his fight against the global electronic industry from his hospital bed to the international stage. While battling his own work-induced leukemia, Yi Yeting teaches himself labour law in order to prepare a legal challenge against his former employers. As the struggle to defend the lives of millions of Chinese people from becoming terminally ill from work necessitates confrontation with some of the world’s largest corporations, including Apple and Samsung, Complicit turns to become a powerful portrait of courage and resistance against screens and rapacious corporate power in a toxic culture.