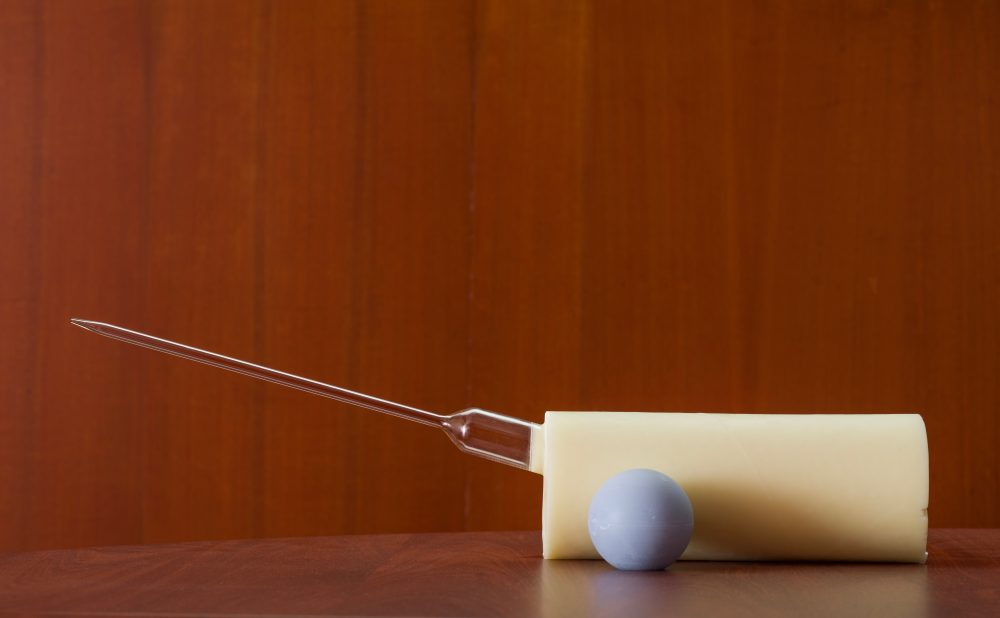 Lilith Vitrified is an extension of a project first exhibited as part of Not Fair 2017. The original project –The House of Lilith – was a sculptural site response in which the artist installed a series of lipstick and glass objects in an abandoned office boardroom. The title of the work referenced the mythological first wife of Adam who refused to submit to him sexually. As a result, she was cast out of the Garden and declared a demon.

To vitrify means to turn into glass, or to freeze in order to preserve against aging or deterioration. The device of enshrining the female subject in glass for this very purpose has been used in folklore, most notably in fairy tales such as Sleeping Beauty and Snow White.

In this exhibition at LOOP Project Space & Bar the installation has been removed from its original context, dissected and isolated within glass vitrines, reducing what was once whole to a series of disjointed and discrete museum objects. Whereby the original installation enacted a certain agency in its intervention of space, here it has been stripped of that agency and reduced to a series of artefactsencased within glass; beautiful but dead.

Vittoria Di Stefano’s research centres on material investigation as a method for examining notions of liminality – or transformative in-betweenness – in a sculptural practice. She employs temporal, marginal and contingent processes to investigate a range of mutable materials as a means to explore the alchemical and transformational properties of the sculptural object.

As well as traditional sculptural materials she employs gendered substances associated with the transformation of the body such as salon waxes, soap and lipstick, transgressing their use value to disrupt approaches to making and viewing. She considers the forces of attraction and repulsion through the inclusion of magnets in her work, and investigates the possibilities of growth and decay through the inclusion of crystals, metals and industrial waste. This choice of materials reflects an interest in the collapsing of binary considerations and a desire to explore the relationship between form and formlessness. In the studio this investigation takes place through a dialogical and cyclical process of desire, discovery, conflict and consequence.

Di Stefano has taken part in solo and group exhibitions nationally and is currently undertaking a PhD at RMIT University, where she also lectures in Art History & Theory and Spatial Practice.