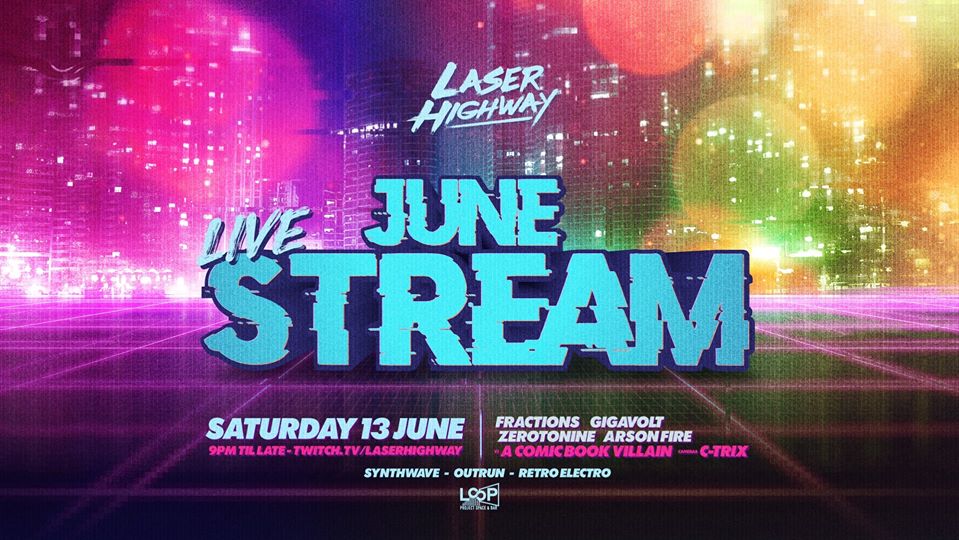 Australia’s premier night dedicated to synthwave and more is back to bring the party into YOUR house through the power of the internet! This time around we’ve got four DJs all in the same super secret industrial location – how novel!

With the superb production value provided by superstar VJ A Comic Book Villain and stupendous camera work by tech-wizard C-Trix, this is the retrowave livestream that you and we have been dreaming of.

As usual we’re presenting this event using our own time, money and other resources. The best way you can help support the stream is by sharing it with everyone that you know and showing up to have a good time. 😀

Fractions is the alter-ego DJ form of one of Laser Highway’s most staunch supporters since its inception. Always adding to the culture behind the scenes, and downright badass post-punk musician in his own right, Fractions will be opening proceedings mixing between legit 80s hits and more modern synth stylings.

Gigavolt has been producing and mixing synth wave, outrun, and electro since 2008. Most recognisable from the wearable tech he wears to Laser Highway, his sound fuses the 80’s neon future with classic cyberpunk themes, always with a heavy beat and lots of drama.

Arson Fire will be heating up the club with searing electro synths on scorching techno beats. If you like your club music dark and deep, let him immolate you.

Zerotonine is the host, resident DJ and runs Australia’s first and only monthly club night dedicated to synthwave, outrun and retro electro: Laser Highway in Melbourne. As a labour of love, he is dedicated to providing a unique experience for music makers and fans alike. He is also the co-host of www.kissfm.com.au’s (87.6 in Melbourne) Retro Electro Show from 3pm Wednesdays AEST.

A veteran DJ and creator for over 15 years playing too many genres internationally and at home in Australia, he is in love with arpeggio basslines, warm synths, and driving drums; his style is inspired by 80’s movies, the Lamborghini Countach, boss fights, neon vectors, keytars, androids, reverb guitars, gated drums, cosmic phenomena, bleeps and bloops. Expect a range of sonic styles to get your feet stomping and head rocking from all corners of the retro-verse.

Laser Highway respectfully acknowledges the Wurundjeri people of the Kulin Nations as Traditional Owners of the land that this event takes place. We pay our respects to Elders past, present and emerging.