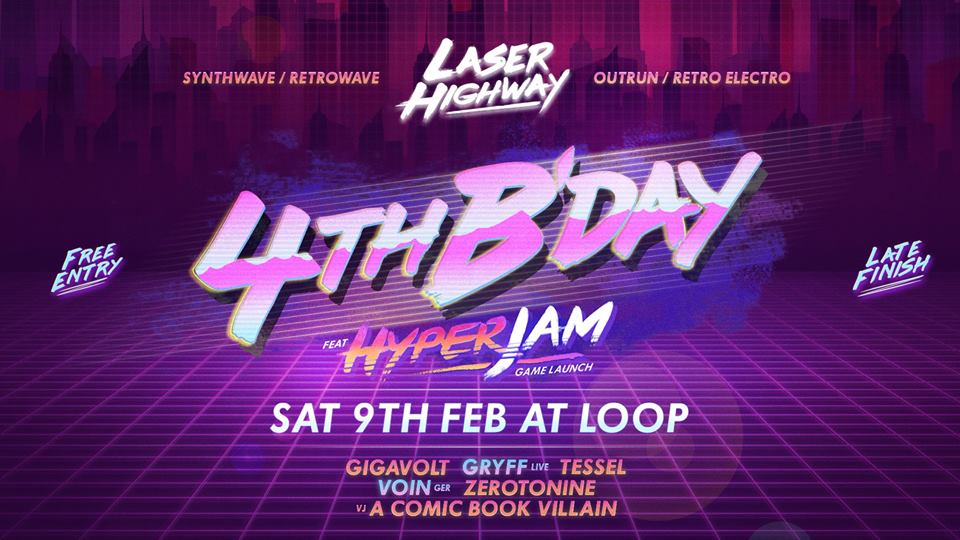 You are radically invited to the 4th anniversary party for Melbourne’s mecca of synthwave culture, and 48th monthly event in a row of sheer sonic and sight delights from the retro future. We’re bringing back a bunch of heavy hitters to look after aural entertainment, and by popular demand we’re happy to host BitDragon Games as they launch their cyberpunk set 4-player competitive shooter/brawler with a full retrowave soundtrack, Hyper Jam!

We had a great time having them in showing off their title still in development this time last year, but now it’s ready, AND THERE WILL BE A COMPETITION – WITH PRIZES – MARK MY WORDS! Can’t wait for you to join us! 😀

On the cusp of releasing his debut album ‘Calypso Drip’, Gryff continues his conquering of tropical synth-pop by creating music that is soaked in nostalgia yet still feels crisp, fresh and completely new. It’s a modern-sounding love letter to the glory moments of decades past, pink sunsets and all.His 2018’s track ‘Jessie’ scored him a #1 spot in Reddit’s ‘Outrun’ channel, as well as features on New Retro Wave’s sister channels.

He is working on his debut album ‘Calypso Drip’ as well as collaborations in 2019 with Kalax, Jordan F, Moonraccon, Icarus, Turbo Knight and more. Gryff’s influences include 70s/80s Synthpop/Funk/Disco such as Phil Collins and Hall & Oates with modern synthwave influences including Ollie Wride, The Midnight and Robert Parker.

TESSEL
Tessel is a DJ and designer inspired by all things Outrun, Cyberpunk, fast cars and outer space. He’ll bring an eclectic mix of everything cyberpunk and outrun to the mixtable, crank some pounding beats and trippy soundscapes.

VOIN (Germany)
Originally from Melbourne, but now residing in Berlin, Germany, Voin is a musician, DJ & co-creator of the infamous ‘Blitz Club’ (2010 – 2013), Berlin’s Germanys first and only New Romantic inspired escapade into synthesized music and clubbing spectacle. Voin has played Berlin venues such as Berghain, Horst Kreuzberg, Cosmonaut, About Blank,
Bi Nuu, Cookies with additional shows around Europe for Laroboterie Italy, Spellbound & Dark Allies Amsterdam, Kaiku in Helsinki and is currently the resident DJ at Worm nightclub in Rotterdam, Netherlands plus Leipzig’s, Germany’s Lumiere Bleue parties at I.F.Z. Synthetica is the name of Voin’s current event that is held monthly at Berlin’s Festsaal Kreuzberg. Voin’s DJ sets usually cover the more darker and lighter dreamlike dance orientated side of Synth and beyond. Prepare to be transported.. emotionally.