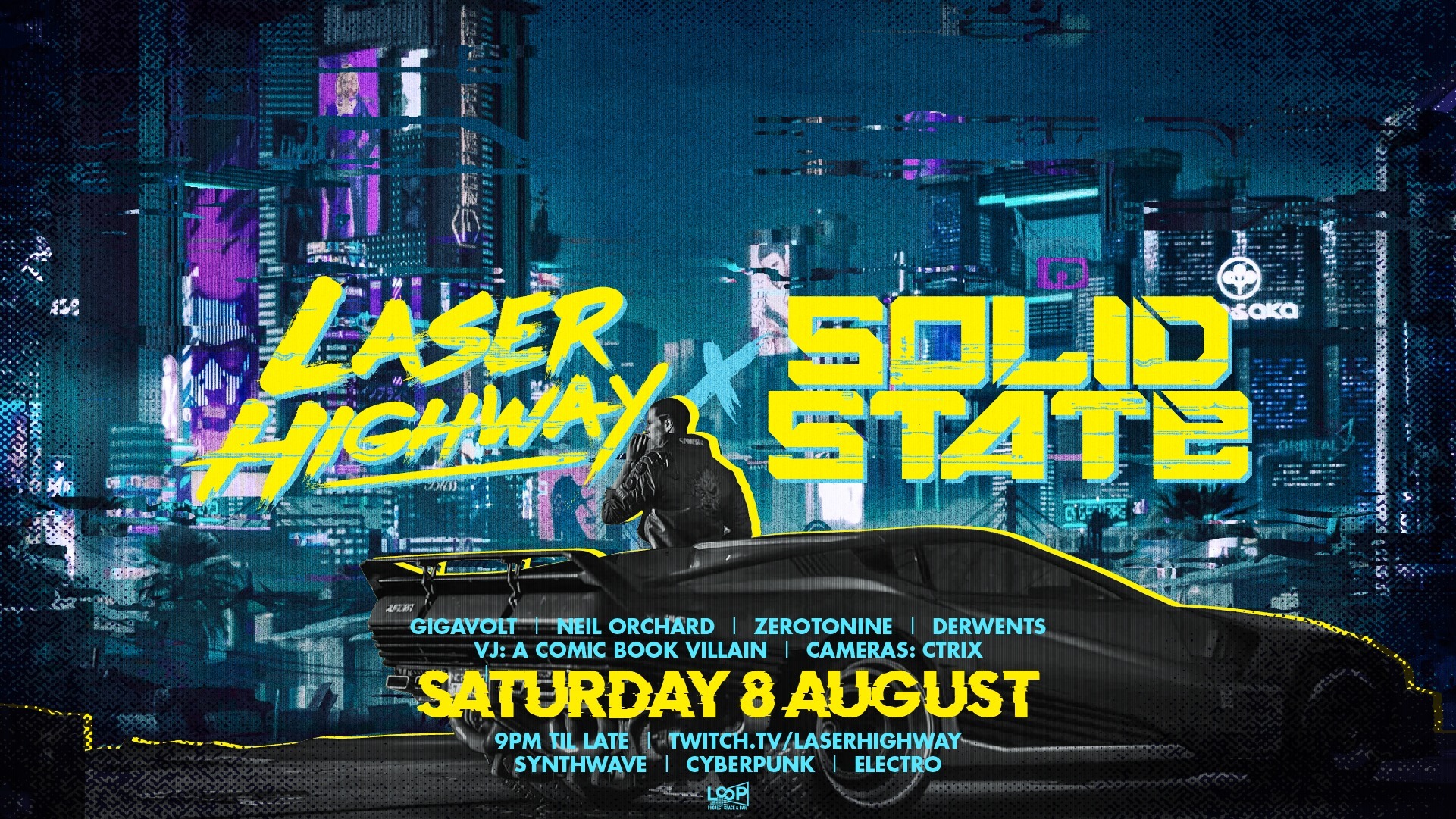 cTrix
With the entire state of Victoria being imposed with an overnight curfew, it feels like we’re living in some kind of dystopic nightmare. And while we certainly appreciate the need for such drastic measures, that doesn’t mean that we can’t party in place and riff on dark futurism.
With that in mind, we’ve had to drastically extend our remote performance capabilities, with each and every single person involved in the production doing their thing from their own home. While we’ve had to sacrifice some of our usual production value, we can still promise to bring you the best audio visual experience this side of Night City!
This is Laser Highway X Solid State – the cyberpunk club interfaced via your neural implants.
THE LINEUP
————————-
GIGAVOLT
Gigavolt has been producing and mixing synth wave, outrun, and electro since 2008. Most recognisable from the wearable tech he wears to Laser Highway, his sound fuses the 80’s neon future with classic cyberpunk themes, always with a heavy beat and lots of drama.
https://www.instagram.com/babel_infocalypse/
https://soundcloud.com/gigavolt_official
https://www.facebook.com/gigavolt.official
————————-
NEIL ORCHARD
Neil Orchard etched out his musical path listening to the otherworldly sounds of obscure funk and European electronic music from the 70s and 80s. Exploring an array of sound archives from Belgium to Detroit and beyond, the physical journey continued though the steamy basements and factories of Melbourne’s rave scene of the 90s.
Playing recently at Techno Insurgency, Big Red Bus, and Earthcore, get ready for a sci-fi trip into a tapestry of dark, atmospheric, synth-heavy, analogue sounds. “For me, the mix is what counts, rather than specific tracks or genres. How can I sculpt something fresh out of old and new sounds?”
www.mixcloud.com/neilthetruthseekingprimate
————————-
ZEROTONINE
Zerotonine is the host, resident DJ and runs Australia’s first and only monthly club night dedicated to synthwave, outrun and retro electro: Laser Highway in Melbourne. As a labour of love, he is dedicated to providing a unique experience for music makers and fans alike. He is also the co-host of www.kissfm.com.au‘s (87.6 in Melbourne) Retro Electro Show from 3pm Wednesdays AEST.
A veteran DJ and creator for over 15 years playing too many genres internationally and at home in Australia, he is in love with arpeggio basslines, warm synths, and driving drums; his style is inspired by 80’s movies, the Lamborghini Countach, boss fights, neon vectors, keytars, androids, reverb guitars, gated drums, cosmic phenomena, bleeps and bloops. Expect a range of sonic styles to get your feet stomping and head rocking from all corners of the retro-verse.
https://soundcloud.com/laserhighway
www.instagram.com/laserhighway
www.facebook.com/laserhighway
————————-
DERWENTS
Derwents is an LED-based enigma. They’ll be playing all sorts of bass and wave fueled BANGERS.
————————-
9PM – LATE
TWITCH.TV/LASERHIGHWAY
Laser Highway respectfully acknowledges the Wurundjeri people of the Kulin Nations as Traditional Owners of the land that this event takes place. We pay our respects to Elders past, present and emerging.
+ Google Calendar+ iCal Export