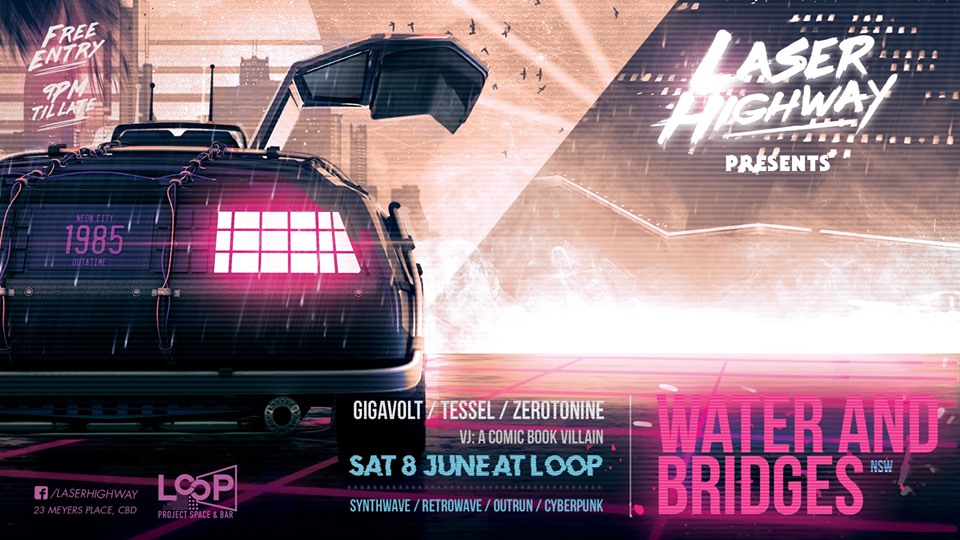 This June, it’s time to fire up your Mr. Fusion-powered Delorean, Testarossa, Countach, 911, Blade Runner Spinner or even the criminally underrated Lotus Esprit into the future past for one of the best lineups of the year 20XX! Come dance, drink, play as we shift into overdrive for one incredible night that’ll leave flaming trails behind your dancing kicks (figuratively).

WATER AND BRIDGES (NSW)
Andrew Morrow AKA ‘Water And Bridges’ (W&B) has been active in the Australian music scene since 2005. Like many, W&B started out in garage rock and punk bands during high school. After 4 years in metalcore band Convex on guitar, where the band performed along the east coast with artists such as Sleepmakeswaves and In Hearts Wake, Andrew left the band to have more time dedicated to electronic music.

Taking inspiration from soundtracks of such films as Transformers, The Breakfast Club, The Lost Boys and Tron, W&B moved into creating synthwave music – starting with the NewRetroWave ‘Top 10 newcomers of 2017’ EP ‘Neon Skyline’. Following this, W&B has released two albums ‘Tales From The City’ and ‘Starbound’, both of which spreading across the web through Spotify retrowave playlists and review sites.

Recent Singles ‘Battlestations!’, ‘The Outskirts (feat. drunk on a bike)’ and ‘Blue Eyes’ have all held #1 placings on Triple J Unearthed charts. W&B is now preparing to release his third album, ‘Miami Heart’, in late 2019, which will feature both Australian and International guest artists including synth powerhouse Gryff and acclaimed opera singer Monica Oriel.

TESSEL
Tessel is a DJ and designer inspired by all things Outrun, Cyberpunk, fast cars and outer space. He’ll bring an eclectic mix of everything cyberpunk and outrun to the mixtable, crank some pounding beats and trippy soundscapes.