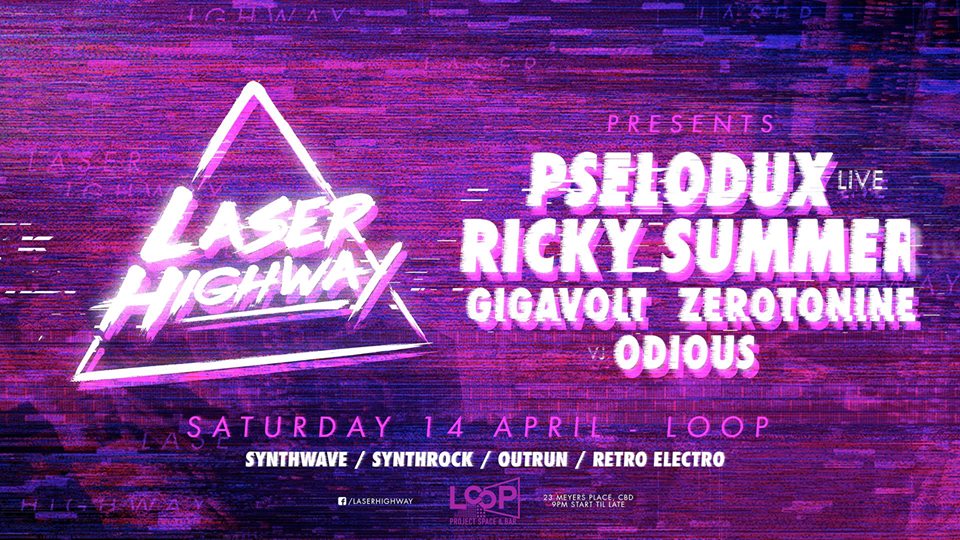 April is a live act bonanza that covers the breadth of styles within the retro revival movement, from dreamwave to straight-up synth metal. No matter your preference, you’ll have an awesome reason to be there! Of course, your fan favourite DJs will round out the night, the tall cyberpunk laserhawk wielder and the other short sweaty one who daggy dances until close! Joining us on VJ duties is Odious, one third of Melbourne-based synth-wizard trio GAMER MUSIC who has amassed the most on-point professional retrowave loops that I have not seen anywhere else (ie. tumblr). You will be amazed!

PSELODUX (LIVE)
Pselodux takes an arsenal of cosmic electronics, power drums and heavy riffs, and smashes them into progressive synth metal, while also paying respect to surf disco classics from the early 80s.
Armed with a new axe designed for optimal chug and wail, Pselodux’s performance will take you to another planet and back again.

RICKY SUMMER (LIVE)
One fateful night at a local Melbourne pub, blues rock musician Riccardo Estate found himself trapped in the whirling doom of a freak time travel vortex. A tunnel to the nexus of time itself.

He was transported to the year 2085, to the pulsing mean streets of Bay City. In this neon dark future he became Ricky Summer, the retro cyber minstrel. Now, with keytar in hand he returns to [insert present year] to warn the world of the future that awaits us.