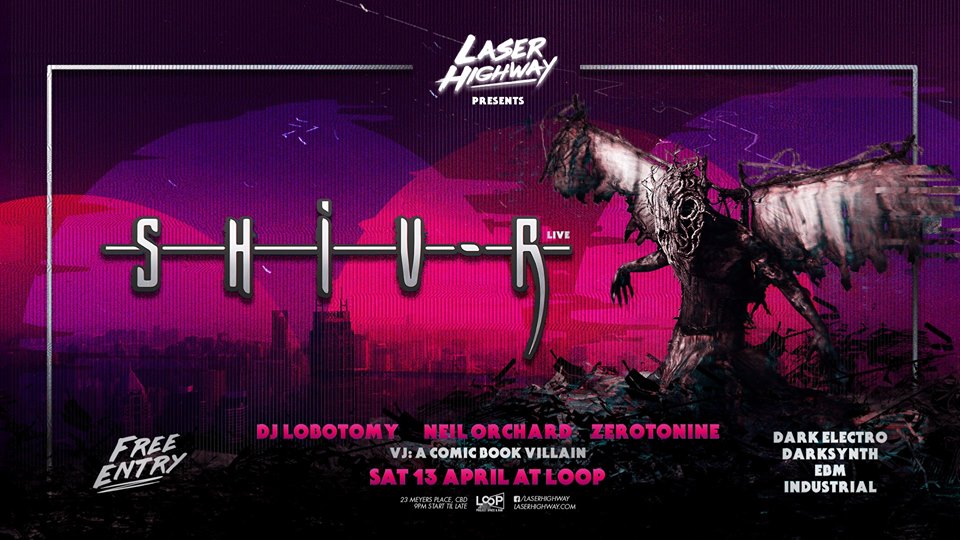 In April, Laser Highway flicks on dark mode as we explore sights and sounds in the more evil side of cult electronica. We’re proud to host two acts linked closely with the local dark electronic scene making their Laser Highway debut, rounded out with favourite regulars to make this night a delightful delve into a digital dystopia.

SHIV-R LIVE
Since their debut album release in 2010, Australian electro-industrial act SHIV-R have made an impact on the international dark alternative music scene and set themselves apart with a uniquely hard-hitting yet elegant sonic aesthetic. The group have toured extensively throughout over 20 countries including festivals in Europe and North America and have received heavy rotation on industrial dancefloors worldwide with their releases hitting number 1 on the DAC (German Alternative Charts) and top 10 in the GEWC (German Electronic Web Charts).

DJ LOBOTOMY
Hailing from Ireland, for the last 15 years DJ Lobotomy has been promoting and DJing alternative events. From Cabaret Nocturne, Carmillas and Slashdance through to most recently Melbourne’s biggest Gothic-industrial, Metal and Alternative club night FANG.
For Laser Highway he’s crafting a set which blends Dark Electronica, Synthpop, and old school Industrial with some of the bleaker Synthwave you know and love…

NEIL ORCHARD
Neil Orchard etched out his musical path listening to the otherworldly sounds of obscure funk and European electronic music from the 70s and 80s. Exploring an array of sound archives from Belgium to Detroit and beyond, the physical journey continued though the steamy basements and factories of Melbourne’s rave scene of the 90s.

Playing recently at Techno Insurgency, Big Red Bus, and Earthcore, get ready for a sci-fi trip into a tapestry of dark, atmospheric, synth-heavy, analogue sounds. “For me, the mix is what counts, rather than specific tracks or genres. How can I sculpt something fresh out of old and new sounds?” Fun fact: When people ask Neil what his favourite music is, and he replies with EBM, he has to correct people when they think he likes EDM. Big difference.