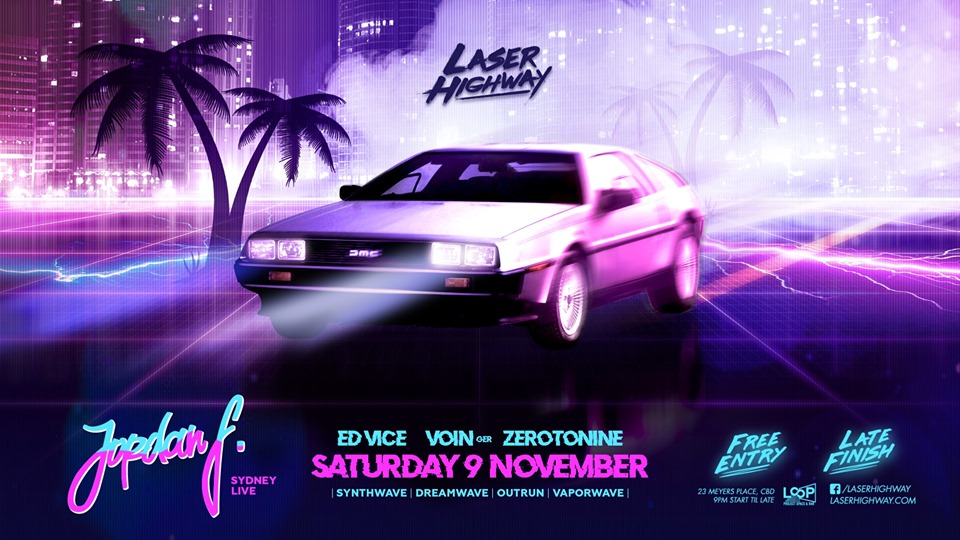 Summer is fast approaching! We love fast cars, palm trees and pastels – so we’ve crafted an event to pay homage to the retro summertime spirit by inviting Laser Highway fave OG synthwave wunderkind Jordan F launching a bunch of new material! Supporting the legend is an international smorgasboard of selectors and a visual artist plying their wares across Brazil, Germany, Spain, Italy and more. Our fans are not going want to miss this one!

We run monthly events featuring an incredible sound system, laser light shows, projection art, cocktail list, a big screen multiplayer game space and a pounding dancefloor to transport you to your retro home away from home. We’ve prided ourselves on creating a radically inclusive alternative club night to give you an experience that’s all about those thumping beats, synthesized basslines, good times and a touch of nostalgia and camaraderie from your past, present and future friends that you haven’t yet met.

JORDAN F (SYDNEY)
Jordan F is a producer from Sydney, Australia who makes 80’s electronic music with a modern fidelity. Starting out at the beginning of the second wave of dreamwave artists (the scene that had just come off MySpace) he was picked up by Rosso Corsa Records (home to Mitch Murder, Lazerhawk and Miami Nights 1984).

After flexing his musical muscles on numerous remixes and an EP, his debut album ‘Slipstream’ was finally released in 2014. This was followed up in quick succession with the release of his sophomore album ‘Timelines’ in 2016. Both releases strengthened Jordan’s reputation as a producer with a knack for retro flair without the constructions of genre.

2017 saw his music featured in the Netflix psychological thriller ‘Death Note’, while also releasing a collaboration EP with Sydney duo Vast Hill. In the wake of 2018 he released his third full length album ‘Oblivion’ – an adventure into spacey, ominous sounds and Lovecraftian horror.

His fourth full length album is planned for release in early 2020.

Voin has played Berlin venues such as Berghain, Horst Kreuzberg, Cosmonaut, About Blank, Bi Nuu, Cookies with additional shows around Europe for Laroboterie Italy, Spellbound & Dark Allies Amsterdam, Kaiku in Helsinki and is currently the resident DJ at Worm nightclub in Rotterdam, Netherlands plus Leipzig’s, Germany’s Lumiere Bleue parties at I.F.Z. Synthetica is the name of Voin’s current event that is held monthly at Berlin’s Festsaal Kreuzberg.

Voin’s DJ sets usually cover the more darker and lighter dreamlike dance orientated side of Synth and beyond. Prepare to be transported.. emotionally.

ED VICE
Ed Vice is no stranger to retro sounds. Having played gigs in the last ten years ranging from 80s synthpop to glam metal to freestyle, it was no surprise when he entered the synthwave world – and never left. ED hosted one of the first retrowave nights in Brazil for three years before moving to Melbourne. His sets mix recent synthwave classics with hidden gems of the retrowave scene.