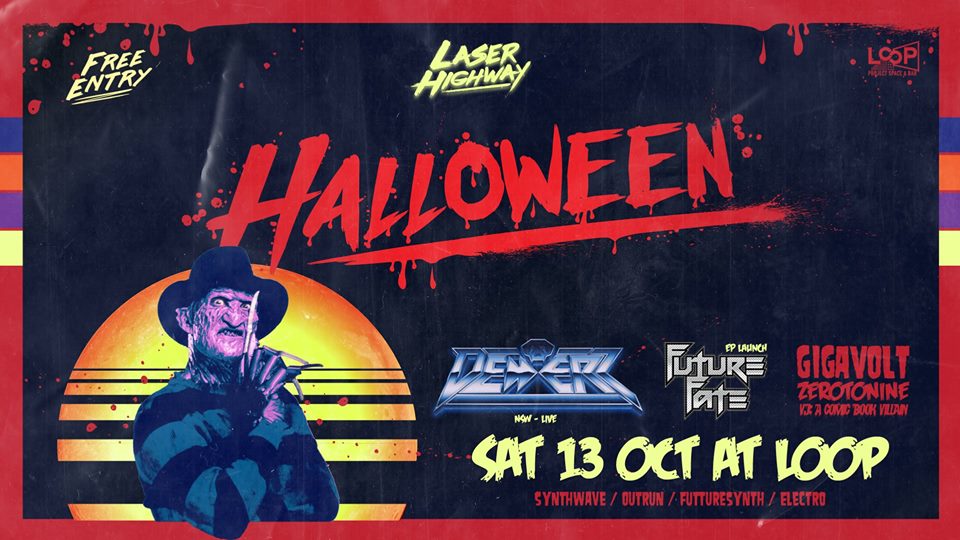 Halloween comes early to the haunted house of Laser Highway, where Dream Warriors battle against Freddy Krueger, camp counsellors fight Jason Vorhees and a plucky young Laurie Strode survives Michael Myers’ onslaught! Come dance, drink and play to your rapidly beating heart’s content with one of the most electrifying dreadwave acts this country has ever seen, rounded out by selectors, one of which is launching his brand new futuresynth EP! Dressing for the occasion is encouraged!

FUTURE FATE (EP Launch)
A prophecy foretold of the coming of Okimra. It tells that at the precipice of the technological era an AI will rise to consume the world of man. Our dependence on technology had made the entity all powerful and its thirst to destroy had led to the destruction of every major city on earth. It is a sum total machine, a dystopian symbiote, that powers itself by sucking up and assimilating every mechanical thing in its path. Its destructive power is matched only by its disdain for all living things.

The Mechanism was created by the father of AI to safeguard humanity against an uprising. After his untimely death it was thought that all hope was lost in the war against Okimra. The Mechanism could only be activated by one who was worthy of the knowledge it held within. A series of tasks would have to be completed in order to activate the mechanism, and with mankind on the brink of destruction, a legendary hero would need to rise in order to decipher the mechanism and save the planet. To be continued….

Future Fate will be performing a special DJ set featuring a tracklist of wholly original creations.