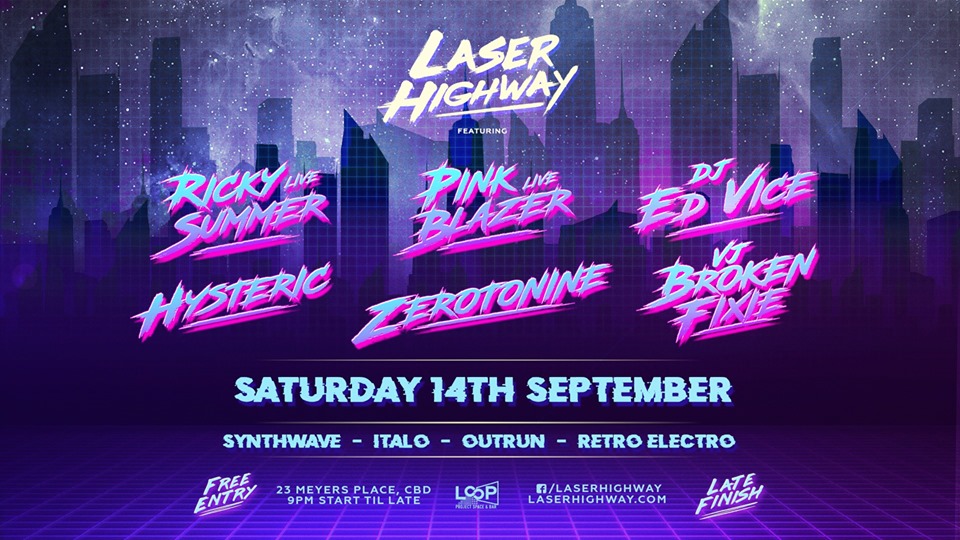 In September, we’re going to take you on a journey from the times of excess in 1985 right through to the rain-slicked neon streets of 2085. We’re stacking the live music deck with TWO performers this month, plus three DJs to keep your feet moving via the sounds of retrowave from the Americas, Europe and Australia!

We run monthly events featuring an incredible sound system, laser light shows, projection art, cocktail list, a big screen multiplayer game space and a pounding dancefloor to transport you to your retro home away from home. We’ve prided ourselves on creating a radically inclusive alternative club night to give you an experience that’s all about those thumping beats, synthesized basslines, good times and a touch of nostalgia and camaraderie from your past, present and future friends that you haven’t yet met.
______________________________________________________
RICKY SUMMER LIVE
From the neon-soaked mean streets of Bay City comes time travelling synth rocker, Ricky Summer. A man out of time, he fights to outrun the future, searching for a way back home.

Synthwave project based in Melbourne, Australia.

Making tunes for a modern Miami world, where the lights are neon and the walls are purple.

https://pinkblazer.bandcamp.com
https://www.instagram.com/pink.blazer/
SPOTIFY LINK: https://open.spotify.com/artist/00J5xe3XKC0Vtjb8sKlxmr?si=U0yFCfQrQLOOi63d1j6SBw
______________________________________________________
ED VICE
Ed Vice is no stranger to retro sounds. Having played gigs in the last ten years ranging from 80s synthpop to glam metal to freestyle, it was no surprise when he entered the synthwave world – and never left. ED hosted one of the first retrowave nights in Brazil for three years before moving to Melbourne. His sets mix recent synthwave classics with hidden gems of the retrowave scene.