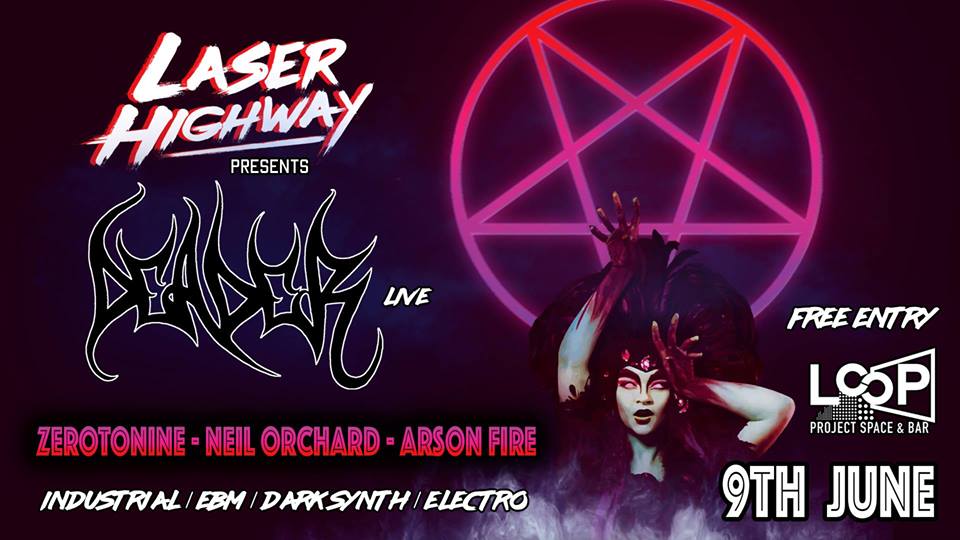 June is the month that Laser Highway goes to the dark side; the palm trees and Miami sunsets have been replaced with occult rituals, dystopian cityscapes and cold electronics featuring an up-and-coming EBM/industrial live duo supported by three selectors who have sacrificed their souls to the dark(synth) lords exploring darker electronic styles to feed your deepest desires!

DEADER (LIVE)
Deader is an Industrial/EBM duo formed in Melbourne, Australia in 2017 by Scud Viney and Lou Cormick. Heavily influenced by the darker end of 80s electronic music, Deader’s sound is a combination of danceable, sweaty club mania (in the spirit of EBM groups like Front 242, Covenant and Nitzer Ebb) and hard Industrial rhythms, textures and vocals (like Skinny Puppy, Ministry and Front Line Assembly).

Deader began playing shows in September 2017 and to date have released 4 digital recordings as well as playing a number of shows with a varied roster of local and international artists including Youth Code (US), KPG (US), Diploid, Uboa and Ninja Gaijin. Their debut full length ‘The Deadening’ is slated for tape release via Cat Fight Records in June.

NEIL ORCHARD
Neil Orchard etched out his musical path listening to the otherworldly sounds of obscure funk and European electronic music from the 70s and 80s. Exploring an array of sound archives from Belgium to Detroit and beyond, the physical journey continued though the steamy basements and factories of Melbourne’s rave scene of the 90s. Playing recently at Techno Insurgency, Big Red Bus, and Earthcore, get ready for a sci-fi trip into a tapestry of dark, atmospheric, synth-heavy, analogue sounds. “For me, the mix is what counts, rather than specific tracks or genres. How can I sculpt something fresh out of old and new sounds?” Fun fact: When people ask Neil what his favourite music is, and he replies with EBM, he has to correct people when they think he likes EDM. Big difference.

ARSON FIRE
Arson Fire will be heating up the club with searing electro synths on scorching techno beats. If you like your club music dark and deep, let him immolate you.