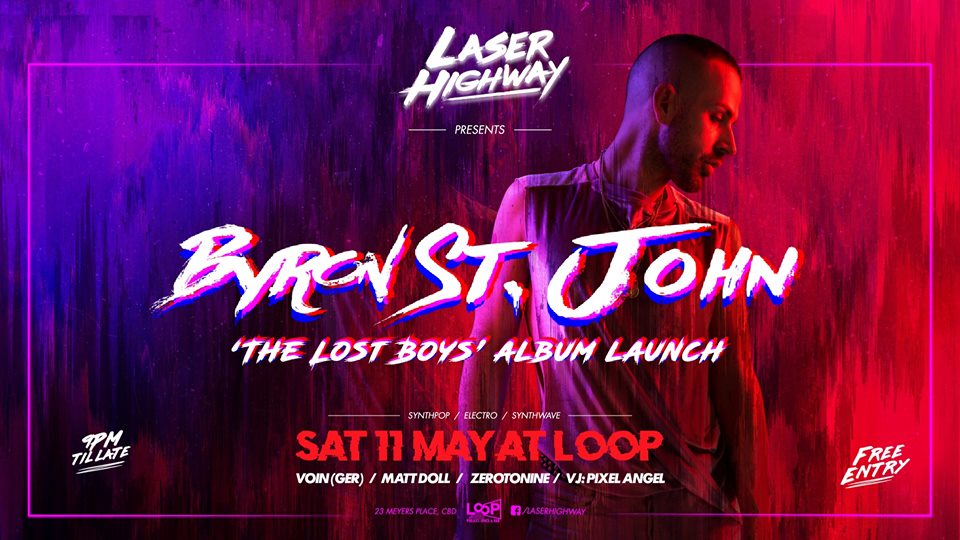 In May, Laser Highway hosts the album launch for one of Melbourne’s best synthpop talents, Byron St. John! Byron is no stranger to Melbourne’s music scene, performing bands such as the minimalist darkwave influenced Der Kreis, and synthpop ensemble Video Video. We’re rounding out the support lineup with some infectious dancefloor filling DJs for one incredible night to keep your feet bouncing till you collapse in a smiling heap of bliss!

BYRON ST. JOHN LIVE
Having spent the past number of years performing in a string of other bands,Melbourne-based singer-songwriter Byron St. John is no stranger to the glittery world of synthpop. His music is simultaneously shimmering and rich; shiny on the surface and emotionally resonant within.

With the release of his debut full-length album, The Lost Boys, St. John has quickly built himself as one of Aussie pop music’s most exciting and promising emerging acts. If you’re not already familiar with this artist, this new album is the perfect introduction.

Across the album’s nine-track duration, Byron St. John glides through an irresistible blend of disco, dream-pop, and rock to craft a sound uniquely his own. At times, his music can be abrasive—but charmingly so. The pulsating rhythms that drive this record will rattle your bones, but the weight of these industrial noises are lightened
by infectious and sweeping vocal hooks.

Synthetica is the name of Voin’s current event that is held monthly at Berlin’s Festsaal Kreuzberg. Voin’s DJ sets usually cover the more darker and lighter dreamlike dance orientated side of Synth and beyond. Prepare to be transported.. emotionally.

MATT DOLL
Matt is well versed in the Melbourne and Australian-at-Large music scenes. While he may be most recognised due to his time with The Mavis’s, his other projects include synthpop band Video Video, Matt & Beki, The Blow Waves and The B-Dolls. It may come as no surprise that most of the acts are heavily new wave influenced, which fits us to a tee.

Matt is the resident DJ of various venues around town where he spins all manner of moon and space disco, 80’s, hi-NRG or anything else from his immense record collection – chances are you’re going to love it.