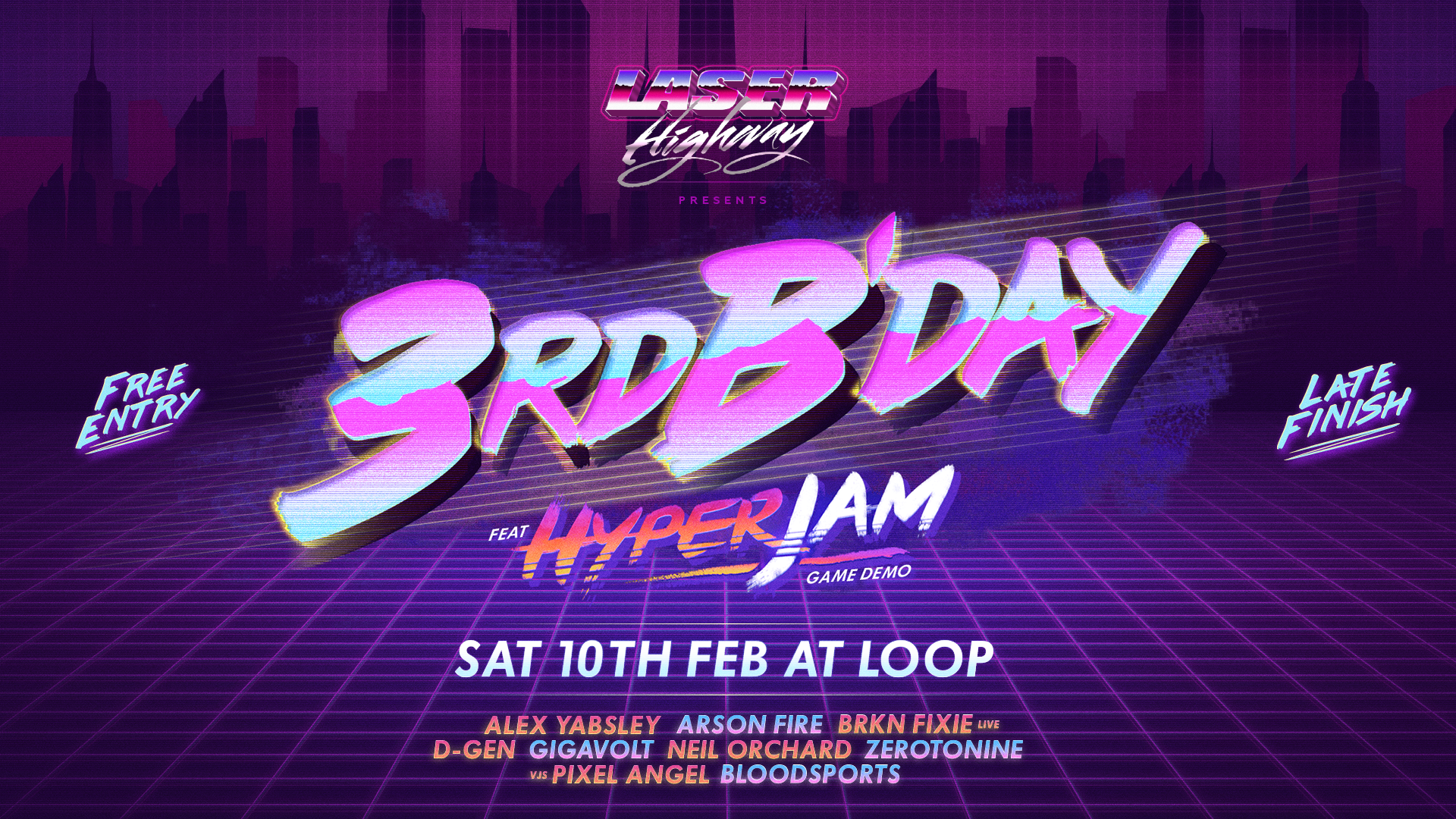 This month marks Laser Highway’s third year of operation! We’ve come a long way, starting in a small arcade bar (RIP FoWo ?) just playing DJ sets by myself and a grand total of maybe 10 punters who were all my friends, to booking other DJs, then live acts, then I got lasers and a smoke machine to our current home which regularly hits its capacity of 150 guests! To celebrate we have assembled the largest lineup we have ever featured featuring your favourite Laser Highway regulars and a few new faces to keep things fresh!

Our game space is also transforming, and we have invited the dev team behind the upcoming retrowave arena brawler, Hyper Jam, to showcase their title so you and three of your friends can duke it out in a neon-soaked world to see which reigns supreme!

ALEX YABSLEY
A music obsessive who hopes to one day listen to all the music, he has been exploring the intricacies of electronic music sub-genres for years and occasionally is on the radio (Triple R) or Podcast (Genre Cult). At Laser Highway Alex gets to indulge in his favourite hidden 80s relics, pop classics and modern retro everything. He had too many aliases so decided people should just call him by his name.

ARSON FIRE
Arson Fire will be heating up the club with searing electro synths on scorching techno beats.

D-GEN
D-GEN was first recognised as a Jungle & Techno DJ at underground events and raves in the early New Zealand electronica scene during the mid nineties, immediately driving for the breakbeat sound as he designed sets of low profile, hard hitting music evolving through Drum & Bass / breakbeat and into Tech House & retro inspired Electro. Sam also is the founding member for Kiss FM’s Retro Electro Show that he hosts with Zerotonine!

NEIL ORCHARD
Neil Orchard etched out his musical path listening to the otherworldly sounds of obscure funk and European electronic music from the 70s and 80s. Exploring an array of sound archives from Belgium to Detroit and beyond, the physical journey continued though the steamy basements and factories of Melbourne’s rave scene of the 90s. Playing recently at Techno Insurgency, Big Red Bus, and Earthcore, get ready for a sci-fi trip into a tapestry of dark, atmospheric, synth-heavy, analogue sounds. “For me, the mix is what counts, rather than specific tracks or genres. How can I sculpt something fresh out of old and new sounds?”