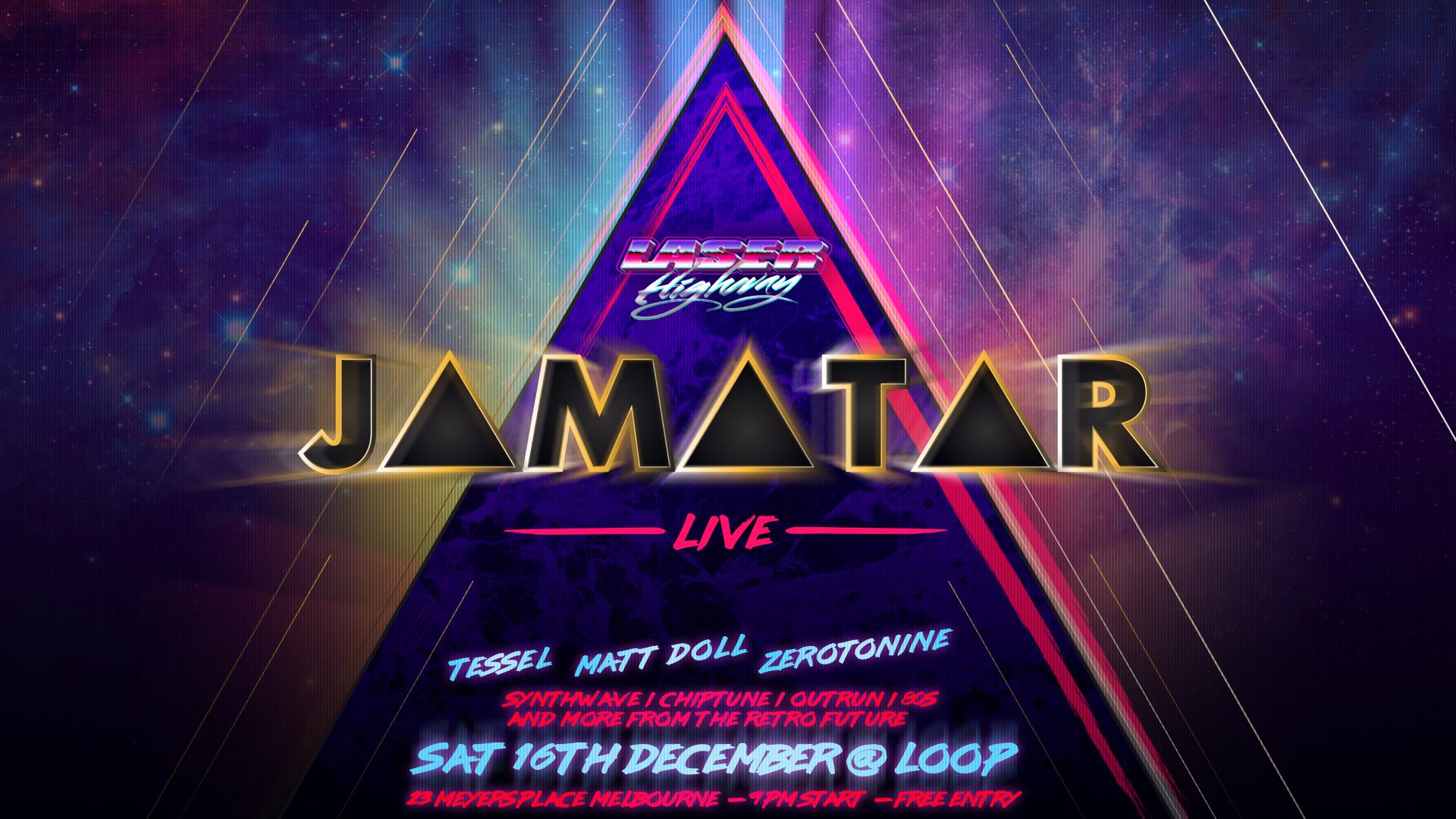 SYNTHWAVE // CHIPTUNE // OUTRUN // 80S AND MORE FROM THE RETRO FUTURE

Laser Highway takes over Loop Project Space and Bar one last time in 2017 to host Australia’s premier night dedicated to the very best anything-with-the-word-wave-in-it, italo-disco, outrun, retro electro, 80’s jams, games, and anything else firmly with its roots in synthesizer-based music to keep you grooving into the night! We’ve cultivated a culture that takes inspiration from the 80’s and 90’s, cyberpunk, vaporwave, deep reds/purples/blues and a bunch of sci-fi/action movie tropes into a clash of exploding sound and colour.

We want to see 2017 out with a bang, so we assembled a truly formidable and diverse lineup that has something for everyone ranging from synthpop, 80’s dance, space disco, chip music, guitars and of course the classic synthwave and outrun you love to make this a party you don’t wanna miss!

J?M?T?R (LIVE)
In just a few months since inception, electronic enigma J?M?T?R has performed sold out shows in London, penned a UK record deal, and has appeared on festival lineups at NYE on the Hill, The Hills are Alive, Square Sounds and Pixel Sounds.

Wielding ambient-come-pounding electro beats combined with an impressive visual show, J?M?T?R’s live performance is already amounting a reputation for one hell of a party at his Melbourne shows earlier this year. Come see him live as he wields a synth, guitar and gameboy to your ultimate delight!

TESSEL
Making his return to Laser Highway since moving to Melbourne from Sydney, TESSEL is a DJ and designer inspired by all things Outrun, Cyberpunk, fast cars and outer space. He’ll bring an eclectic mix of old and new Outrun to the mixtable, crank some pounding beats and trippy soundscapes. Coming off the back from supporting synth dark lord Perturbator in Sydney, he’s back to wow the LH audience!

MATT DOLL
Matt is no stranger to the Melbourne and Australian-at-Large music scenes. While he may be most recognised due to his time with The Mavis’s, his other projects include synthpop band Video Video, Matt & Beki, The Blow Waves and The B-Dolls. It may come as no surprise that most of the acts are heavily new wave influenced, which fits us to a tee.

Matt is the resident DJ of various venues around town where he spins all manner of moon and space disco, 80’s, hi-NRG or anything else from his immense record collection – chances are you’re going to love it.