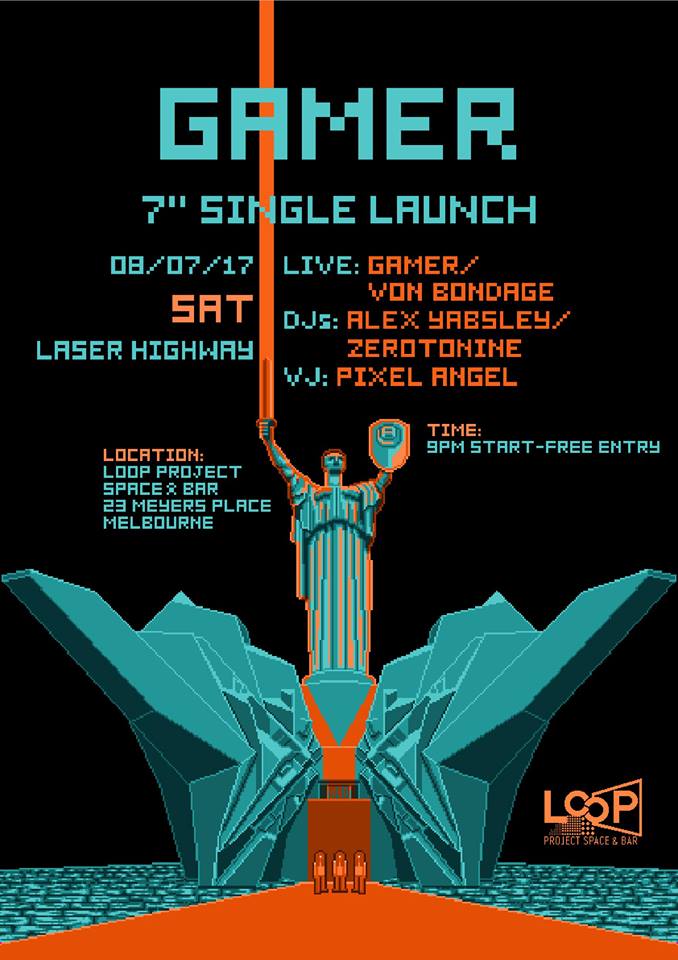 Laser Highway takes over Loop Project Space and Bar once again to host Australia’s only night dedicated to the very best anything-with-the-word-wave-in-it, italo-disco, outrun, electro, 80’s jams, games, and anything else firmly with its roots in 80’s synthesizer-based music to keep you grooving into the night!

We are back with a vengeance in 2017 at a new venue, monthly schedule, opening hours, incredible sound, double the lasers, projection art, cocktail list, big screen multiplayer game space and an actual dancefloor (!!!) to transport you to your retro home away from home. We’ve prided ourselves on creating a radically inclusive alternative club night, to give you an experience that’s all about those thumping beats, synthesized basslines, the good times, a touch of nostalgia and camaraderie from your past, present and future friends that you haven’t yet met.

This July, we are proud to host Melbourne live three-piece synthwielders Gamer to launch their new 7″ vinyl EP release, ‘Imperial Duplicator/Nebula Horizon’! Copies will be available for purchase on the night! Supported by local live synthwave fusion newcomer Von Bondage, and local DJ heroes Alex Yabsley and Zerotonine, this party will generate 1.21 jigawatts to power your flux capacitors as we hit 88MPH.

GAMER (LIVE)
Melbourne synth-maestros Gamer are a force to be reckoned with in the worldwide synth scene. Armed with an array of analogue synths and mind-melding projected pixel art, you will bear witness to an incredible live show with sounds taking inspiration from 70’s psychedelia, 80s sci-fi noir to more contemporary outrun fused with original pixel art animations that truly do need to be seen to be believed.

Equipped with s y n t h e s i s e r s and a cheap knockoff bass with more licks than you can throw a ~Jazz~ cigarette at. You will experience a hadron collision of funk, synthwave, and videogame inspired bangers

ALEX YABSLEY
A music obsessive who hopes to one day listen to all the music, he has been exploring the intricacies of electronic music sub-genres for years and occasionally is on the radio (Triple R) or Podcast (Genre Cult). At Laser Highway Alex gets to indulge in his favourite hidden 80s relics, pop classics and modern retro everything. He had too many aliases so decided people should just call him by his name.

ZEROTONINE
Zerotonine is the host, resident DJ and runs Australia’s first and only monthly club night dedicated to synthwave, outrun, electro, italo-disco, and more from the retro future: Laser Highway in Melbourne.As a labour of love, he is dedicated to providing a unique experience for music makers and fans alike.

A veteran DJ for over a decade playing too many genres internationally and at home in Australia, he is in love with arpeggiated basslines, warm synths, and driving drums; his style is inspired by 80’s movies, the Lamborghini Countach, boss fights, neon vectors, keytars, androids, reverb guitars, cosmic phenomena, bleeps and bloops. Expect a range of sonic styles to get your feet stomping and head rocking from all corners of the retro-verse.