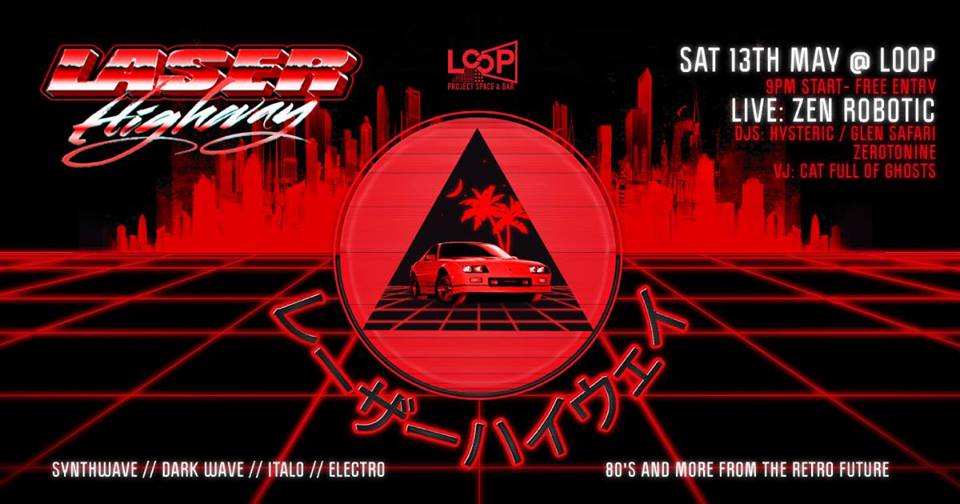 Laser Highway takes over Loop Project Space and Bar once again to host Australia’s only night dedicated to the very best anything-with-the-word-wave-in-it, italo-disco, outrun, electro, 80’s jams, games, and anything else firmly with its roots in 80’s synthesizer-based music to keep you grooving into the night!

We are back with a vengeance in 2017 at a new venue, monthly schedule, opening hours, incredible sound, double the lasers, projection art, cocktail list, big screen multiplayer game space and an actual dancefloor (!!!) totransport you to your retro home away from home. We’ve prided ourselves on creating a radically inclusive alternative club night, to give you an experience that’s all about those thumping beats, synthesized basslines, the good times, a touch of nostalgia and camaraderie from your past, present and future friends that you haven’t yet met.

Join us as we shift into overdrive featuring a dream lineup that includes a live three-piece electronic outfit joining forces with three DJs masterfully spinning 80’s funk, italo disco, outrun, everything in-between and beyond the infinite soundscape of the future’s past, and the past’s future.

The band’s dark synth driven sound draws inspiration from acts such as Depeche Mode and New Order. While deep, thought provoking lyrics are akin to the lyrics of Nick Cave and Leonard Cohen.

GLEN SAFARI
Specialising in boogie funk, soul & disco, Glen Safari spins records like it’s 1986. Rare bangers and soulful tunes from 80’s underground discos, he will take you on a funk odyssey back to the days of geri-curls, synthesizers and slap bass.

ZEROTONINE
Zerotonine is the host, resident DJ and runs Australia’s first and only monthly club night dedicated to synthwave, outrun, electro, italo-disco, and more from the retro future: Laser Highway in Melbourne.As a labour of love, he is dedicated to providing a unique experience for music makers and fans alike.

A veteran DJ for over a decade playing too many genres internationally and at home in Australia, he is in love with arpeggiated basslines, warm synths, and driving drums; his style is inspired by 80’s movies, the Lamborghini Countach, boss fights, neon vectors, keytars, androids, reverb guitars, cosmic phenomena, bleeps and bloops. Expect a range of sonic styles to get your feet stomping and head rocking from all corners of the retro-verse.