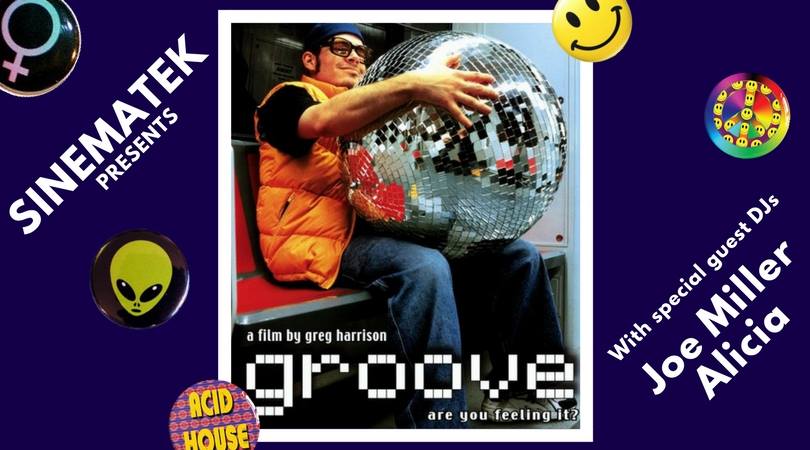 For the next few instalments of Sinematek, we’re heading deep down the rabbit hole of club culture. Films celebrating the wonderful world of nightlife have been a staple part of Sinematek’s diet and we’re proud to bring one of the most overlooked films back to the big screen – GROOVE.

How could you forget that iconic cover art as you browsed your local video store? In these dire times for cinema, GROOVE is a refreshingly uptempo experience. If Robert Altman was a 90s raver and not an angry alcoholic he would probably have made something like GROOVE.

On Friday, a single e-mail blips through the Internet. The word spreads quickly through the city: the party is on. Saturday evening, two hundred people secretly converge at an abandoned San Francisco warehouse. As the sun sets the records start spinning, setting into motion a night that no one will forget.

Featuring a fabulous ensemble of party people, plus a slew of real life ‘West Coast DJs’, GROOVE is a small treasure for ravers past and present. “Groove provides a cleaned-up, innocuous version of the rave scene, showing it as a life-affirming voyage of discovery instead of what it often is” – Roger Ebert

To celebrate, we’re bringing along two next-level DJs to keep the party going. Kicking off at 7pm, Alicia will be weaving together a set of wobbly, downtempo grooves to get us in the mood. Post-film, local legend Joe Miller will educate the dance floor on the sounds of 90s electro, house, techno – and, dare I say it – a sprinkling of progressive house and trance? Only time will tell.

Tickets are $10 including the film. $5 cash on the door if you just want to attend the party.

See you at the Sinema x