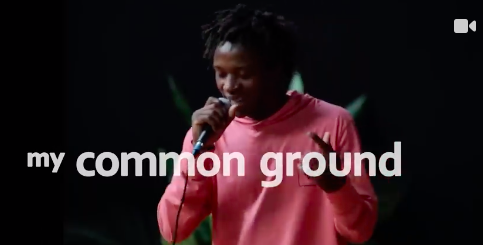 Common Ground Documentary Premiere is part of the Melbourne Spoken Word & Poetry Festival from July 12 to 28. Check out the program at http://mswpf.com.au

Common Ground was established by Multicultural Arts Victoria 5 years ago and is a unique, multilingual, multi-faith project that uses various forms of writing, primarily spoken word, to build connection and understanding between young people of diverse faiths and cultures.

The program comprising of facilitated workshops originated with the Sikh and Muslim communities within Melbourne and expanded to include diverse communities across Melbourne, country Victoria and Perth.

The documentary touches on faith, identity and overcoming adversity through creative expression. It explores the journey of emerging poets Shimaa, Lexi and Patti leading up to their final performance at the Malthouse Theatre, in Melbourne in December 2017.

The documentary also features performances and reflections by past participants who’ve established them selves amongst the emerging Melbourne spoken word scene.

TICKETS: If you are a poet featured in the film and would like to attend this screening, please email flyingayamedia@gmail.com
FOOD AND DRINKS: Loop has a bar, and delicious pizzas.
ACCESSIBILITY: Entrance and bathroom are fully wheelchair accessible.

The Common Ground documentary was produced by Flying Aya and Multicultural Arts Victoria.