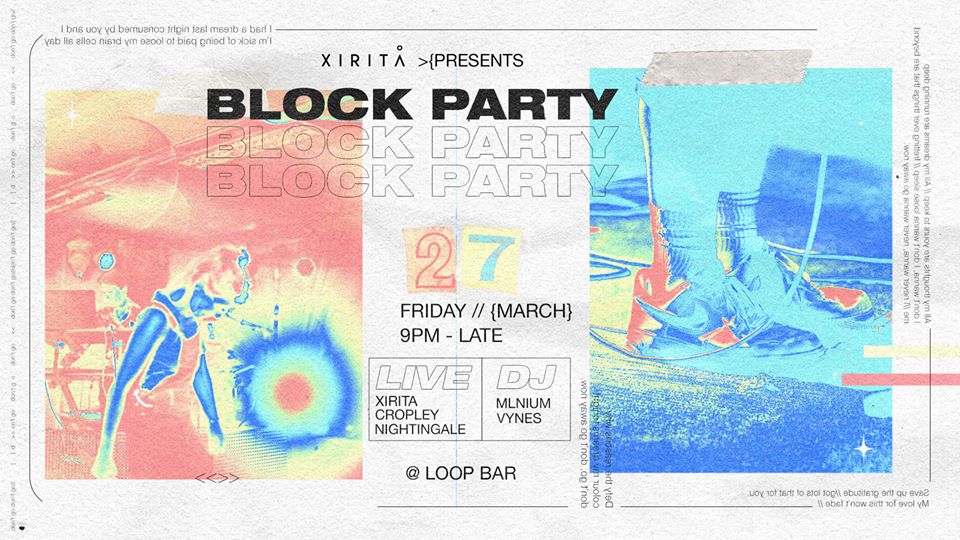 Xirita just dropped her debut single ‘Don’t Go’ and we’re throwing a massive party to celebrate. With a killer line up of artists, including performances from Cropley, Nightingale, Mlnium, Vynes and more – BLOCK PARTY is an event you won’t want to miss.

Xirita’s vocals have earned her praise from Triple J and notable Australian music blogs, being likened to artists such as Vera Blue and Billie Eilish. In late 2019, Xirita teamed up with Melbourne producer, Cropley, to release her debut single “Don’t Go” an honest and brooding electronic fusion, all about creativity. Starting 2020 off with a bang, Xirita has begun touring Melbourne’s iconic venues with performances at The Toff in Town, The Northcote Social Club and The Curtin. Launching her debut headlining show, Xirita’s upcoming performance features a night of musical artistry at Loop Bar on March 27.

ACKNOWLEDGEMENT: Block Party acknowledges and pays respect to the the Boon Wurrung and Woiwurrung (Wurundjeri) peoples of the Kulin Nation, the traditional custodians of these lands and waters in which we will be meeting.