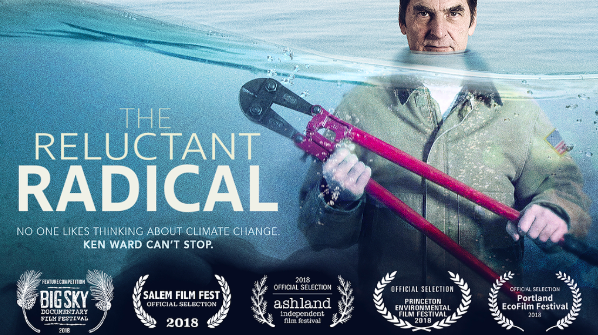 If a crime is committed in order to prevent a greater crime, is it excusable? Is it, in fact, necessary? The Reluctant Radical follows Ken Ward as he confronts his fears and acts on these questions to stop climate change. After twenty years leading some of the most renowned mainstream environmental organisations, Ken witnesses first-hand how ineffective and unthreatening they are. As their efforts fail, and ecological collapse increases in scope and speed, Ken comes to see how direct action civil disobedience is the most effective political tool to deal with catastrophic circumstances. Ken breaks the law, to fulfil his obligation to future generations, to stop the oil economy. By following Ken for a year and a half through a series of direct actions, this film culminates with his participation in the coordinated effort that shut down all the tar-sands oil pipelines in the United States on October 11, 2016. The film reveals the personal costs but also the accurate fulfilment that comes from following one’s moral calling, even if that means breaking the law and its consequences. Ken has no regrets.